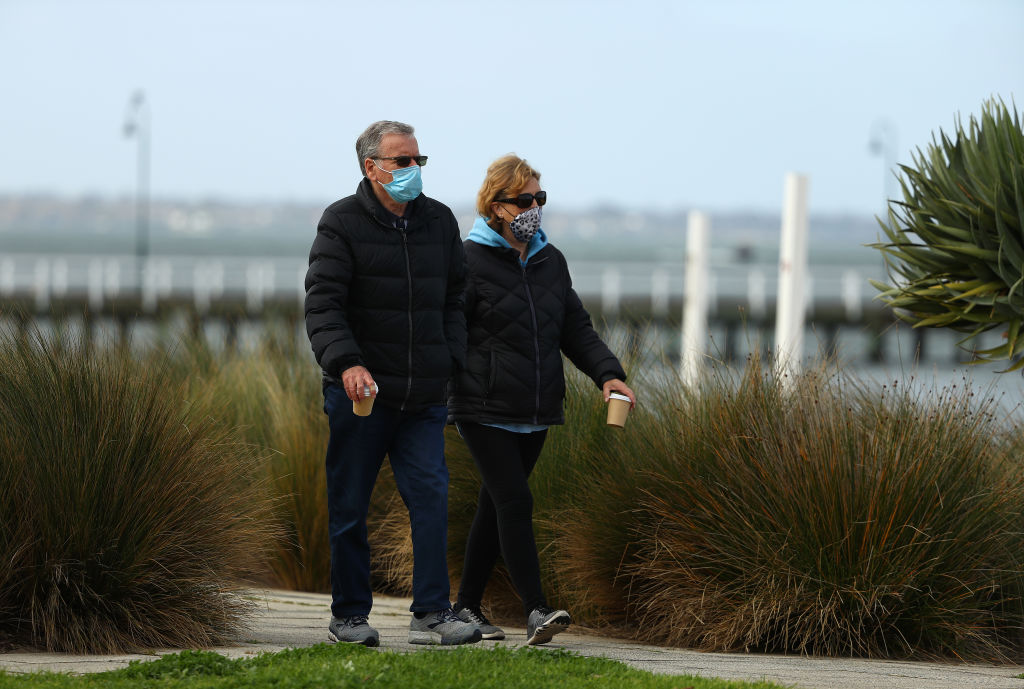 People walk along Port Melbourne Beach in Melbourne, which remains under stage 4 lockdown restrictions. Photo: Getty
Victoria has had mixed coronavirus news, with the death toll passing 700 as new cases had a welcome fall.

Thursday's seven fatalities took the state toll to 701 and the national figure to 788.

But after Wednesday's spike of 76 cases, that figure has dropped to 51.

The 14-day average of new cases will be a critical number in the state government's roadmap out of the second wave.

Melbourne's average of 74.5 on Wednesday and the five for regional Victoria continue to fall.

Premier Daniel Andrews insists his roadmap is the only path out as he continues to cop flak over the plan.

There is no set date yet for when regional restrictions will ease, while Melbourne will remain under a curfew until at least October 26.

"If anger and frustration were like a vaccine against this virus, then we would all be in a much better position," Mr Andrews told reporters on Wednesday.

"The notion that I have chosen this way to go and there were 50 other options I could have chosen, that's not in any way accurate."

The premier has reiterated that restrictions could be eased quicker - depending on case numbers.

That would allow footpaths and parks to be transformed in the coming months to open-air dining and drinking areas, mitigating the risk of business outbreaks.

"You will see roads and laneways closed," Mr Andrews said.

"You'll see parks that will become a centre of not just passive (recreation), but you'll see people drinking and dining in those parks."

As the state also ramps up its much-maligned contact tracing system, testing of up to 300 sewage samples a week is taking place at 25 sites to help detect the spread of the virus.

The government said sewage samples at the coastal town of Apollo Bay had revealed signs the virus was circulating, prompting health authorities to increase testing in the area.

But there have been no positive cases in the area since the local sample was taken on September 1.

Wednesday's statewide test numbers almost doubled to 16,686, up from Tuesday's 8704.