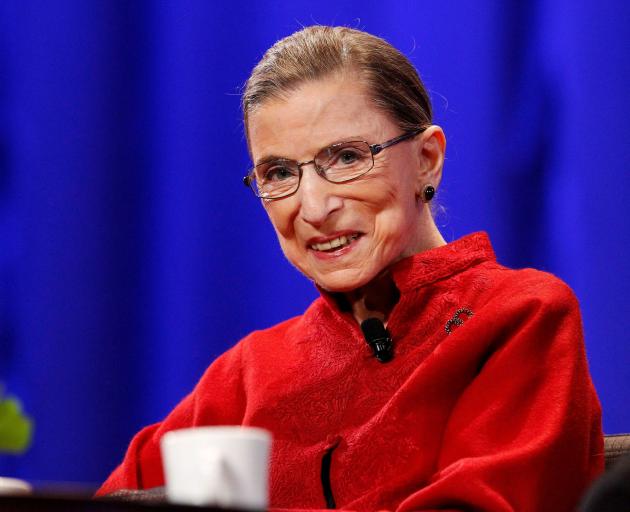 Her death on Friday gives President Donald Trump a chance to expand its conservative majority with a third appointment at a time of deep divisions in America with a presidential election looming.

Ginsburg, a champion of women's rights who became an icon for American liberals, died at her home in Washington of complications from metastatic pancreatic cancer and was surrounded by her family the court said in a statement.

Ruth Bader Ginsburg, who broke barriers with her career in law that eventually led to nearly three decades of service as the second woman justice ever on the U.S. Supreme Court, has died. @IAmAmnaNawaz looks back on her life and legacy: https://t.co/jN3EUzreeu pic.twitter.com/AXWfgvwXt5

"Our Nation has lost a jurist of historic stature," Chief Justice John Roberts said in a statement. "We at the Supreme Court have lost a cherished colleague. Today we mourn, but with confidence that future generations will remember Ruth Bader Ginsburg as we knew her - a tireless and resolute champion of justice."

Supreme Court justices, who receive lifetime appointments, play an enormous role in shaping US policies on hot-button issues including abortion, LGBT rights, gun rights, religious liberty, the death penalty and presidential powers. For example, the court in 1973 legalised abortion nationwide - a decision that some conservatives are eager to overturn - and in 2015 allowed same-sex marriage across the United States.

Iconic Supreme Court Justice Ruth Bader Ginsburg has died at 87 at home in Washington DC. A woman of the highest integrity, #RBG made her mark from an early age on #genderequality cases; stood for fairness & #humanrights for all. She will be greatly missed https://t.co/vTiuLUTOeX

Ginsburg, who rose from a working class upbringing in New York City's borough of Brooklyn and prevailed over systematic sexism in the legal ranks to become one of America's best-known jurists, was appointed to the Supreme Court by Democratic President Bill Clinton in 1993.

Ginsburg was the oldest member of the court and the second-longest serving among its current justices behind Clarence Thomas. She was the second woman ever named to the court, after Justice Sandra Day O'Connor was appointed 12 years earlier.

The Senate confirmation battle over a Trump nominee to replace Ginsburg is likely to be fierce - at a time of social unrest in the United States during the coronavirus pandemic - though Democrats lack the votes to block him unless some Republican senators join them.

A private interment service will be held at Arlington National Cemetery, the court said, but did not specify a date.

Ginsburg's death has kicked off a monumental battle in Congress as Senate Majority Leader Mitch McConnell invited President Donald Trump to promptly nominate a replacement, ignoring pleas by Democrats to await the results of the November 3 presidential election.

"President Trump’s nominee will receive a vote on the floor of the United States Senate," McConnell proclaimed on Friday night, without providing a time frame for action by the Senate.

That confirmed McConnell's prior insistence that he would do so in an election year, despite stonewalling President Barack Obama's efforts to nominate a successor to Justice Antonin Scalia in February 2016, 10 months before that year's presidential election.

Senate Democratic Leader Chuck Schumer urged McConnell to await the results of the elections that are less than two months from now. He quoted McConnell's 2016 words on Twitter, saying "The American people should have a voice in the selection of their next Supreme Court Justice. Therefore, this vacancy should not be filled until we have a new president."

Trump is seeking a second four-year term and has been trailing Democratic presidential nominee Joe Biden in public opinion polls.

The long-term direction of the nation's highest court is at stake. The closely divided court currently had five justices with conservative bents and four liberals. If Trump were to choose a conservative judge to replace the liberal Ginsburg, as expected, the court's conservatives would have more heft with a 6-3 majority.

Democrats are trying to gain control of the White House and the Senate, which has the power to confirm the president's nominees for the Supreme Court.

Since becoming Senate majority leader in 2015 McConnell has focused most of his attention and wielded his power to fill the federal courts with conservative judges nominated by Trump.

It can take several weeks to months between the president's nomination of a Supreme Court justice and a Senate confirmation vote as the nominee must go through a thorough vetting process by the Senate and often makes visits with individual senators to build support for the nomination.

Then, lengthy confirmation hearings in the Senate Judiciary Committee normally follow culminating with a recommendation on whether the nominee should be confirmed and placed onto the court.

The last Supreme Court opening was filled in October, 2018 by Justice Brett Kavanaugh. His confirmation faced strong opposition from Senate Democrats and included bitter hearings amid allegations, which he denied, of sexual misconduct decades earlier.

The Senate is currently controlled by 53 Republicans, while Democrats hold 45 seats. Two independents align with Democrats on most votes.

Among the 53 Republicans are some moderates, including Senators Susan Collins and Lisa Murkowski. Collins is in a tough race for re-election this year in her home state of Maine, which has been trending Democratic.

Ginsburg's death could have an impact on Collins' re-election effort and her posture on whether filling the high-court seat should await the outcome of the 2020 presidential race.