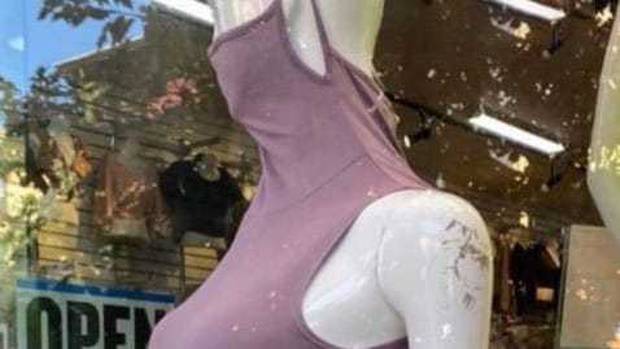 A bizarre new face mask trend is taking off in clothing stores. Photo: Supplied via NZH
With wearing a mask now a fact of life for many parts of the world, it was only a matter of time before this happened.

If you've ever thought, gee I wish I could wear a skin-tight jumpsuit with a built-in mask you're in luck.

Because a new coronavirus-inspired fashion trend has emerged and the internet has a lot to say about it.

Twitter user @loutiett spotted this fashion-forward look this month in a US store and summed it up best by tweeting: "I actually just screamed."

I mean, it definitely ensures you won't forget your mask.

But people on Twitter had mixed thoughts about the look, pointing out there were some, ahem, practical concerns.

"As much as I like the ninja aesthetic going on here, what if you gotta use the bathroom?" one asked.

But surprisingly not everyone was hating the look, with some arguing it wouldn't look out of place on a night out or on the likes of Rihanna.

Incorporating masks into clothing is far from a one-off incident, with Fashion Nova, purveyor of tiny bikinis and Kylie Jenner-inspired dresses, launching a range of clothing with built-in face coverings and co-ordinating outfits on its website.

A study published this month named N95 masks, triple-layer surgical and reusable cotton masks as the most effective face coverings.

The worst face mask to wear are neck fleeces, which could allow more respiratory droplets to escape compared to if you weren't even wearing a mask.

Typically worn by runners, neck fleeces broke down bigger droplets into small particles, allowing them to slip through the material more easily.

Also performing badly were bandannas or knitted face coverings which offered little to no protection.

One of the study's authors Dr Martin Fischer told CNN it wasn't only important to wear a face covering but also to "wear masks that actually work".

I have something like this- but it is just a tank top and also includes a hood. (It's this item, but I do not have the same pattern, got a different one) pic.twitter.com/7mePwn1qct