A pandemic’s terrible toll: Thousands of Kiwis killed in weeks

0 Comments
World War 1  came to an end in 1918 but joy was short-lived in New Zealand, with a deadly influenza pandemic sweeping the country soon after. Health reporter Mike Houlahan looks at how the south coped with a disease which killed about 1000 people in just a few weeks. This story was first published in October 2018, but we have republished it now as NZ and the world faces the coronavirus outbreak.

The 1918 flu pandemic killed an estimated 50-100 million people globally —  about  5% of the world’s population —  a toll far worse than that of World War 1 which preceded it.

However, the war was so devastating and lasted for so long that the far more lethal pandemic which followed on its coat tails is today something of an afterthought.

The pandemic strain of influenza first appeared overseas in January 1918, and  probably arrived in New Zealand  about September.

In just two months, half as many New Zealanders who had died in the four years of war were killed by the disease.

They breathed their last at home, in hospital, or in the halls, classrooms and grandstands which were pressed in to emergency service as wards — and then as morgues. 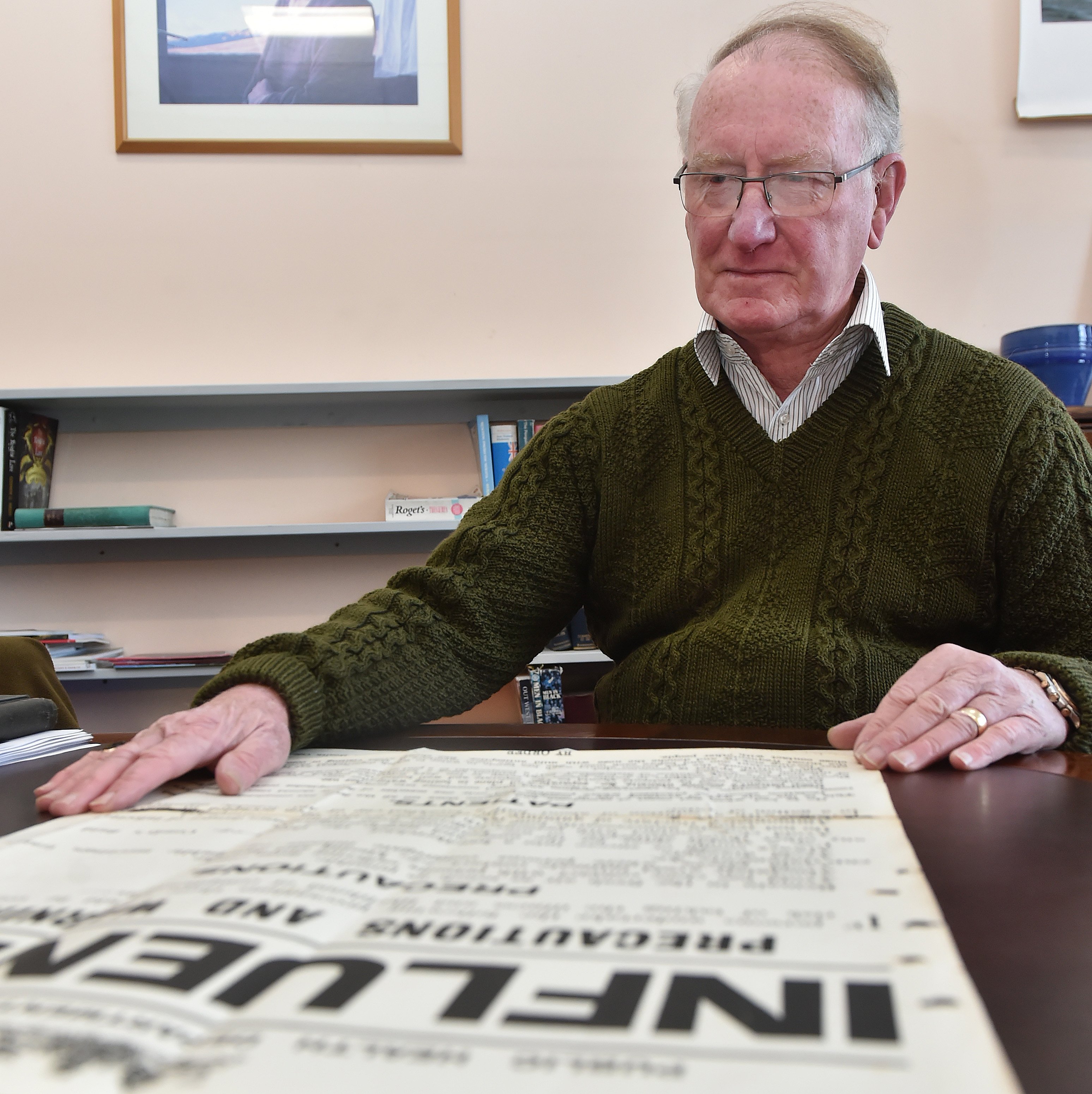 However, with war still raging in Europe and a fiery debate being waged over prohibition, the arrival of the lethal disease in the North Island received only brief coverage — and its threat to those in the South was woefully underestimated.

"The influenza which is prevalent here is, however, not of the severe type that is epidemic in Auckland and to a less extent in Wellington and other cities, and it is probable that the climatic conditions in Otago will furnish the community with a measure of protection against the disease," the ODT reported on November 9 — five days after the first influenza death in Dunedin.

"You would have had another quarantine barrier, Cook Strait, and as I understand it they probably didn’t recognise the gravity of the risk.

"Because the country was dependent on coastal shipping and the ferry service and the railways, it was inevitable that influenza would reach the South Island." 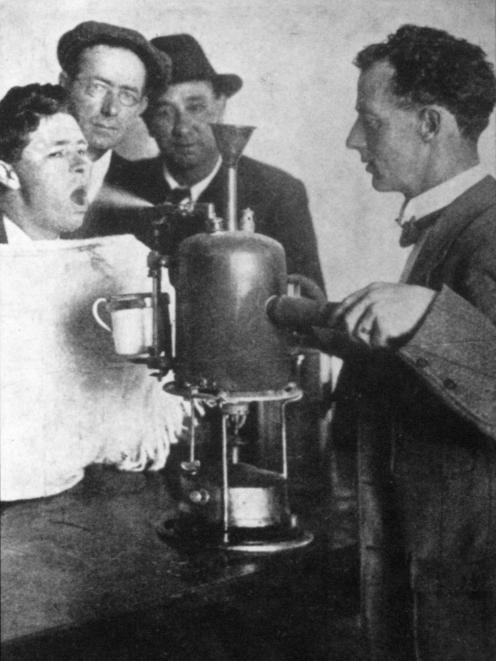 A zinc sulphate inhalation sprayer, a machine used throughout New Zealand to try to prevent the spread of influenza, and now housed at Toitu Otago Settlers Museum. Photo: Black November by Geoffrey Rice

Commercial air travel was years away, but New Zealanders were highly mobile in 1918.

It was possible to travel from Auckland to Invercargill in two days, hence influenza swept New Zealand at a rapid rate —  people started dying of the disease in Whangarei and Invercargill at almost the same time.

New Zealand had endured epidemics before — there had been outbreaks of typhoid, influenza, smallpox, and even the bubonic plague at various times — but nothing on the scale of this strain of influenza.

The country also did not have the necessary public health bureaucracy to deal with the pandemic. In 1918 the Public Health Department’s Wellington head office employed just eight people, and two of them were seconded to the army in Europe.

To add to the sense of confusion, once influenza reached Wellington the Ministry quickly became paralysed as its staff succumbed to the disease. Dunedin’s chief medical officer, Irwin Faris, had recently qualified in England, and had little knowledge of New Zealand’s public health systems.

"He was thrown in to the job with very little resources, in crisis conditions, and without the policy and administrative back-up you would expect from Wellington," Dr Brunton said.

Not helping his task of containing influenza was the unconfined joy of Dunedin’s people when news broke that the Armistice was signed and the war had ended.

"If you look at the Otago Witness photographs of the celebration of the Armistice on George St, somewhere between 10 and 30,000 people were packed in to that area," Dr Brunton said.

"You can’t tell me someone there didn’t have the flu."

Dr Faris ordered fumigation of public buildings and then closed schools, hotels and other gathering places — but only after the disease had become established in Dunedin.

The old Dunedin Hospital, which was full to bursting point during the influenza pandemic. Photo: Hocken Library
By then, it was too late.

Trams and train services were either erratic or non-existent; police and fire services were running on bare bones, workplaces shut down or  operated on restricted hours, banks closed . . .  and Dunedin Hospital, and two auxilliary hospitals set up to assist, were at full capacity and then some.

Morale had started to become an issue, as the ODT noted on November 20.

"It has been suggested that funerals, which are now unfortunately so common, should not traverse Princes and George Streets but should utilise some of the lower parallel streets.

"The effects, it is pointed out, is rather depressing and is certainly not conducive to the raising of one’s spirits.

On November 22 — the day Dunedin’s Catholic Bishop, Michael Verdon, died of influenza —  Dunedin Hospital wards were crammed with 247 influenza cases, including four of its five surgeons and 82 of its 116 nurses.

As the crisis continued, a massive community effort started to kick in.

As well as the makeshift hospitals, volunteers were running food depots, looking after children whose parents were afflicted, running flu assistance bureaux throughout the city, offering their cars to  help health workers stranded without public transport, and  myriad other tasks.

"It was women who provided all the work behind the scenes," Dr Brunton said.

"The matrons of Maori Hill and Roslyn were brought up in an era where they were expected to perform good works, so they would do these things — they would make soup, medicines and what have you.

"The epidemic, in a way, brought out the best in people . . . There was a tremendous level of community support and activity, both from the voluntary community sector and from the health sector." 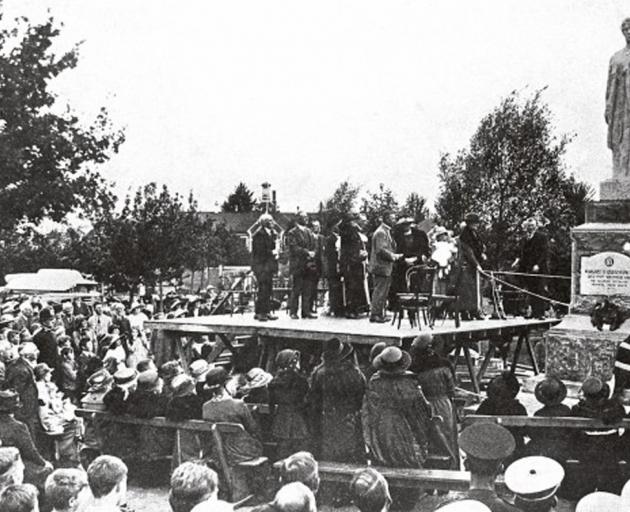 Waimate locals gather in 1923 at the unveiling of a statue commemorating Palmerston-born, Dunedin-trained Dr Margaret Cruickshank — one of the few public memorials to the 1918 pandemic. She was killed by the disease after treating many locals. Photo: Christchurch City Libraries

Almost as quickly as the pandemic swept the South, it was over. By December 10 the city’s hospital had almost returned to its normal admission rates.

Early the following year Canon Bryan King of St Peter’s Caversham — one of the foremost organisers in Dunedin during the pandemic — received the OBE, £1000 and a new car to mark his service.

Hundreds of others who helped out received certificates of formal and grateful thanks.Strangely, though, no public memorials were erected to those killed by influenza, unlike the many war memorials which  sprang up, and many of Dunedin’s victims lie in an unmarked mass grave in Anderson’s Bay cemetery."I guess people were too stunned to think about it," Dr Brunton said.

"So many families had been affected by loss of family members overseas, which was a unique experience, and I guess that drowned out paying attention to something much more close to home."You might have had a war to end all wars, but you didn’t have a pandemic to end all pandemics."

• Next Saturday: In the second part of our series, we ask could an event like the 1918 influenza pandemic happen again, and, if it did, would Dunedin cope any better?

November 22: Invercargill doctors reject second appeal to introduce block system; city flu death rate of 10.7 people per 1000 is one of the highest in New Zealand. Dunedin Hospital has 247 influenza cases, including four of its five surgeons and 82 of its 116 nurses. Michael Verdon, Catholic Bishop of Dunedin, dies.

November 24: 130 railways staff off work. Man dies, leaving a widow and nine children, eight of whom are ill. Motorists urged to offer their cars to help ferry nurses and supplies.

November 26: Pandemic peaks in Dunedin, with 16 people dying of influenza at the hospital.

November 27: 157 patients in Dunedin Hospital, situation declared to be improving. Block system being wound down.

November 30: Almost all staff and 180 patients, ill at Seacliff.

December 2: 17 new influenza patients admitted; it was 46 a week earlier.

December 4: ODT publishes table of deaths at Dunedin Hospital: 25% of those admitted with influenza in the previous month died.

The epidemic killed an estimated 9000 New Zealanders in less than two months. In contrast, World War 1killed  just over 18,000  in four years.

Disproportionate numbers of Maori were killed: their overall rate of death was 50 per 1000 people, about eight times that of Pakeha.