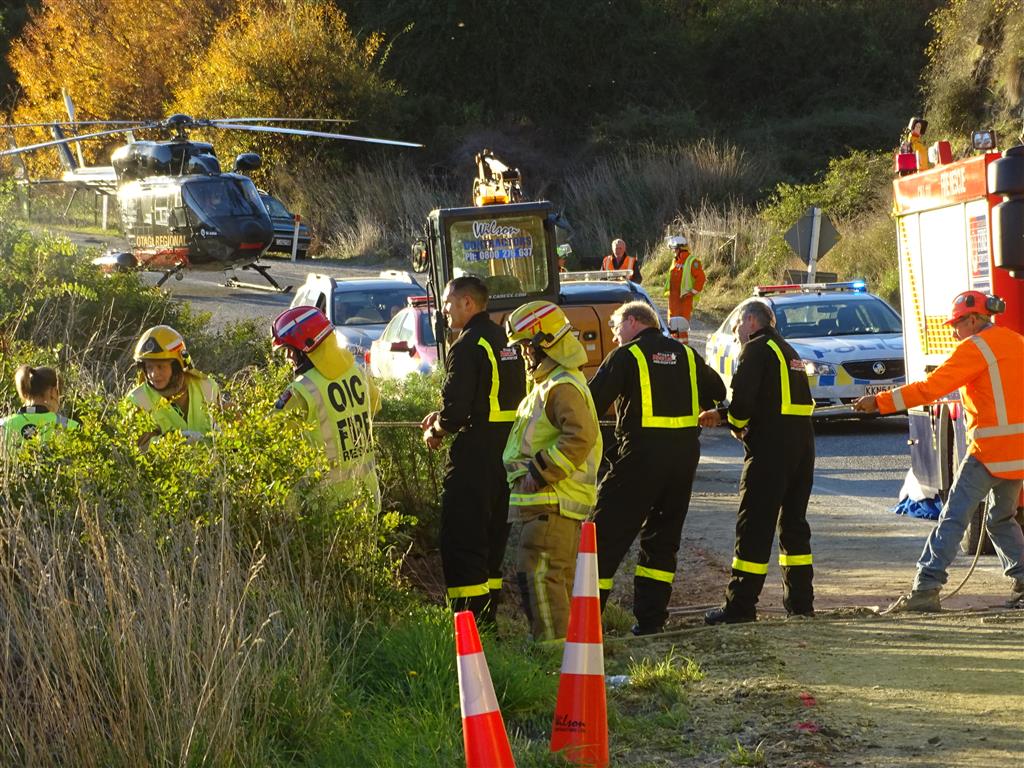 Emergency services at the crash scene at the time of the crash. Photo: Tracey Roxburgh
A Queenstown contracting company has been fined $275,000 after a heavy roller driven by an unlicensed driver rolled 20m down a bank.

In May 2018, the company had been hired to level the shoulder of a road and install safety barriers along State Highway 6 between Frankton and Kingston in Queenstown.

Despite previously being being censured over an unlicensed employee operating a roller, the situation occurred again.

WorkSafe’s Head of Specialist Interventions Simon Humphries said the victim was operating the roller to create a flat surface behind safety barriers for future maintenance work, when the incident occurred.

He suffered serious injuries including compound fractures to both bones in his lower leg, a punctured lung and four broken ribs along with wounds to his head and foot, the court heard.

The victim was airlifted to hospital where he spent nearly three weeks.

WorkSafe’s investigation found that the 7.5 tonne roller should not have been used so close to a steep drop off, that the worker had no experience operating such machinery and did not hold a licence endorsement to do so.

Mr Humphries said the company was aware that the worker did not hold the appropriate licence.

“The previous incident should have raised red flags for Wilson Contractors (2003) Limited immediately. The company was fully aware of the risks involved in operating this kind of machine,” he said.

“WorkSafe’s advice to any business is ensuring you have the right person for the right job.

Before letting any worker operate heavy, dangerous machinery ask yourself, are they licensed and endorsed? Are they trained and competent? If the answer is no then they simply should not operate it.

“In this instance, not only was the worker unlicensed, it was also the wrong machine for the job. There was a high risk of the machine rolling over, in an area made up of narrow ground and a steep drop off.”

In addition to the financial penalties, a work health and safety project order was imposed by the judge requiring Wilson Contractors to produce an article outlining lessons learned from the incident.