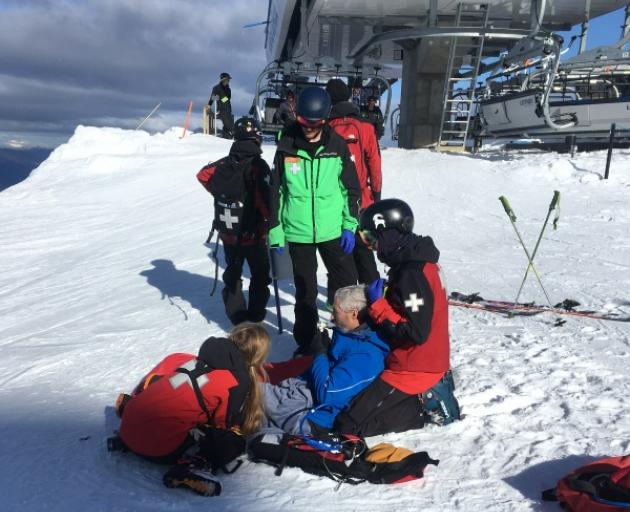 Arrowtown's St John's Presbyterian Church pastor Carlton Johnstone being tended to after sustaining an impact fracture at Coronet Peak in July. Photo: Supplied
An Arrowtown pastor’s set himself a target of being back on the slopes at 100% next season after a ‘‘freak accident’’ at Coronet Peak on July 25 left him with two large metal rods in his hip joint.

Johnstone pushed off down the slope, with one foot out of his bindings.

When he hit an icy section, his board went from under him and he fell, causing an impact fracture.

‘‘It was pretty intense.”

Coronet’s medical crew rendered assistance — one held his leg because he couldn’t straighten it, another held up his back and kept him comfortable while he was given morphine and oxygen to numb the pain. 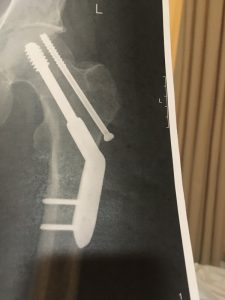 After they got him down the mountain to assess him he was choppered to Southland Hospital for emergency surgery.

He’s off his feet for six weeks before he’ll have an assessment to work out the next stage of his recovery.

But he says the impacts of a serious injury are huge, not least for his wife, Sarah.

‘‘She’s had pretty disrupted sleep looking after me and is up early with the kids.

‘‘She’s taken leave without pay and some sick leave.

He’s grateful, though, for support from ACC and is planning to be up the hill next winter.

‘‘I have a lot of rehab, strength and physio work ahead of me, but it’s great to have a goal.’’