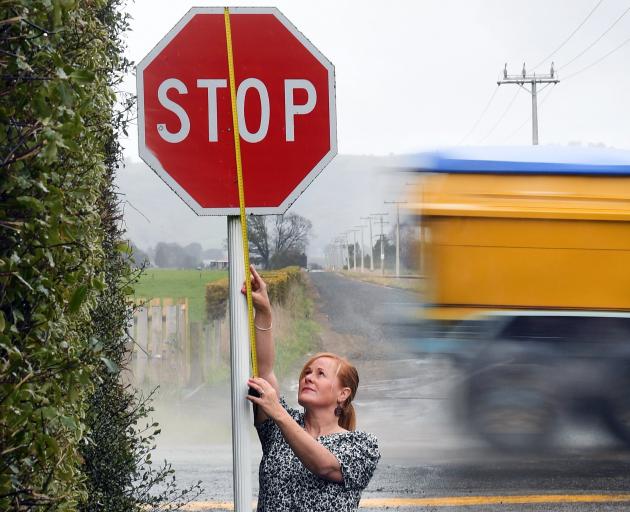 Jayde Cummings’ aunt Chanelle Hayes shows the size the stop sign in Church St West should be. PHOTO: STEPHEN JAQUIERY
The family of a teen killed in an Outram crash are "incredibly angry" that, two years after the tragedy, an undersized stop sign is still not up to scratch. 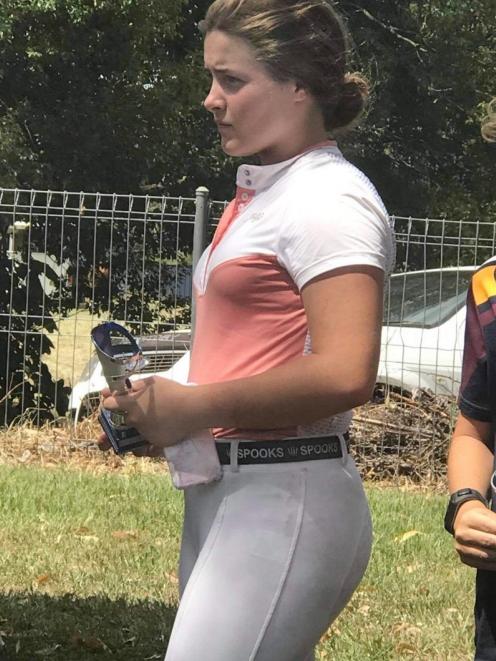 Jayde Cummings will be remembered for her outgoing nature and her love of horses. PHOTO: SUPPLIED
Jayde Cummings (15) died when the then 17-year-old driver of a ute she was in ploughed through an intersection and into the path of 57-year-old Steve Macnee, who was also killed in the collision.

Today marks two years since the event and Jayde’s family remembered her as a "go-getter", an avid equestrian and keen rugby player.

Jayde’s father, Mark Cummings, said it had been "a hellish two years".

"My world fell apart when I found out about the accident and I’ve never recovered from it.

"You just don’t get over that stuff."

The family’s grief has been compounded by repeatedly identified shortcomings of signage in Church Rd West going unaddressed.

A report provided to the Dunedin City Council just days after the incident noted that the octagonal stop signs at the site were the "urban size" (675mm) whereas the NZ Transport Agency recommended they should be 845mm — 25% larger.

The teenage driver went to trial in October last year when Judge Dominic Flatley also highlighted the issue.
"It is largely undisputed that the stop signs present were too small for the road type and speed zone. Roads with 100kmh speed limits require larger signs, the theory being the higher the speed, the bigger the sign and for obvious reason," Judge Flatley said.

The driver was found not guilty of dangerous driving causing death, due, in part, to the sign and the fact it was almost totally obscured by foliage.

While the council had kept the vegetation pared back, the signs remained.

"It just shows how inept the council is," Jayde’s aunt, Chanelle Hayes, said.

"It just makes me incredibly angry that two people died at that intersection and it’s like they don’t give a s...."

A spokesman said the council was unable to respond to the Otago Daily Times’ questions by deadline.

The catastrophe was no shock to local residents David and Judy Reid.

Released documents revealed they emailed the council in June 2019 voicing their concerns about the excessive vegetation at the Huntly Rd intersection.

An engineer responded that they had done a test drive and found no issue with visibility.

"I have to disagree with your findings," wrote Mrs Reid, though her campaigning yielded no change.

"She was the life of the party and she didn’t even try to be."

He admitted comparisons with his own personality were probably valid.

"If we wanted something, we’d put a plan in place and work hard towards it."

The driver responsible for Jayde’s death was granted an absolute discharge in the Youth Court but her father was not informed of the result.

When he found out, he took to social media to vent his fury and used a wooden bat to take out his frustration on buildings in central Dunedin.

Mr Cummings is on bail awaiting sentencing in Auckland in December but has been given permission to visit the crash site and his daughter’s grave today.

After six months away, he was looking forward to it.

"It’s not sad for me. When I’m out there I can feel closer to her."