Almost 100,100 Cantabrians to get a Covid jab by end of June - Ministry 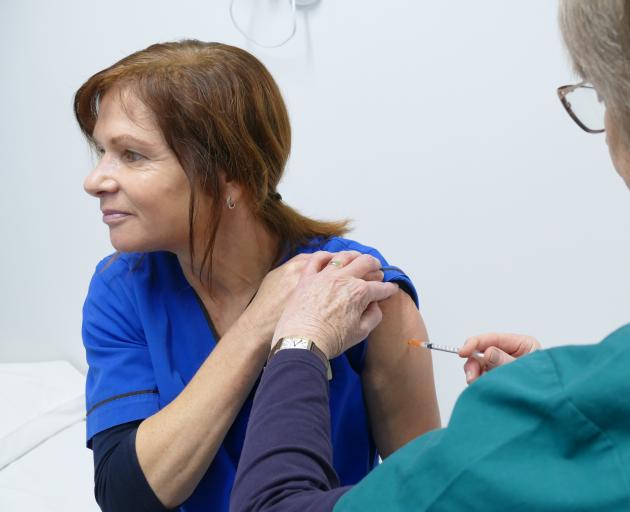 Queenstown Medical Centre nurse Suzie Hilton receives her first Covid-19 vaccination from colleague Liz Taylor at the Isle St clinic on Saturday. PHOTO: TRACEY ROXBURGH
More than one million New Zealanders are expected to be vaccinated by the end of June, including about 100,100 people in the Canterbury District Health Board area, according to the Ministry of Health's latest plan.

It comes after the Government refused to share its progress numbers on the Ministry of Health website following multiple request from the Herald and criticism of messy handling of public health data.

By June 30, the Ministry of Health expects at least 1,161,952 New Zealanders should have received their first jab. This includes nearly 100,100 people in the Canterbury DHB area - about 16% of the population - and 70,324 from the Southern DHB area.

Covid-19 vaccination targets for each DHB
The number of people to be vaccinated by the end of June:

Almost half of national target (497,991 people) will be people from the Auckland metro region, which accounts for about 26% of its population.

And at Capital and Coast and Hutt Valley, at least 65,000 people (20% of its population) should have had their first jab by June 30.

To date, only 84,600 New Zealanders have been vaccinated across the country. In the Wairarapa and West Coast not one person has received the jab.

The most common demographic to receive the vaccination so far are those between the ages of 30 and 39. More than 21,000 in that age bracket have had their first job and more than 6000 have had both.

In order for every New Zealander to be vaccinated by the end of the year, it will mean about one million people will need the jab each month.

Despite having a bigger population than six other regions, the Taranaki DHB is planned to have the lowest coverage with only 7% of its population vaccinated by June 30.