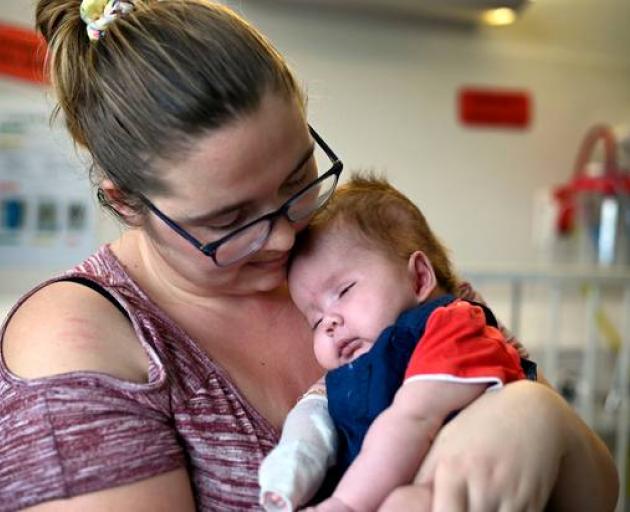 Daxton gets a cuddle from his mum Eden Anderton. Photo: NZ Herald

Baby Daxton was not expected to live. His parents were told he could die before being born. They braced themselves for the worst. But Daxton is a battler. Four brain operations later, the 13-week-old continues to defy the odds.

Daxton Roman looks like every other baby his age at first glance.

Dressed in navy blue short overalls with tiny ship anchors and a red T-shirt with white trim, he has dozed off in his cot on a bright quilt covered in cheerful owls.

He stirs at the sound of a vacuum cleaner doing the rounds. His chubby legs straighten. His fingers, which are curled in tight fists, slowly unwind. His left arm, bandaged up to the shoulder, moves slightly.

He lets out a small whimper as his mother, Eden Anderton, sweeps him into her arms and plants a kiss on his face.

She cradles his head carefully as a nurse pops her nose in the door. Daxton is in Tauranga Hospital. He has only been at home for 13 days of his short life.

There have been operations at Starship children's hospital in Auckland and extended stays.

Eden says the ordeal started when she was 20 weeks pregnant after a scan identified Daxton, her third child with partner Devon Roman, had brain abnormalities.

''You could see half of his brain was the normal grey colour and the other half was real black. Straight away I knew something was wrong.''

The couple went to Maternal Fetal Medicine in Auckland and after magnetic resonance imaging they were told by a specialist he had severe hydrocephalus and ventriculomegaly.

Hydrocephalus is "water on the brain," while ventriculomegaly is the medical term used to describe enlargement of the ventricles of the brain.

''They pretty much told me he was going to die when he was born or die before he was born. And now they are saying he sort of has a chance of dying before he is 1 year old because of all his complications.''

Eden researched the conditions after the diagnosis.

''I figured it out to be the ventricles in the brain, he has two at the top, and they are really enlarged so the fluid can't drain through them so his head was so swollen.''

''But he also has a large cyst in there too which is causing problems.''

Daxton was born at 35 weeks and five days via caesarean at Auckland City Hospital. His head measured 45cm and had been growing by two to three centimetres every week while he was in the womb.

His first operation happened one week later when an adjustable shunt was put in to drain fluid.

''It was just like a magnet you put on and it changes the setting to drain faster or slower.''

Complications arose after the shunt caused a belly infection. The shunt was removed and replaced with an external shunt while he was on antibiotics for 14 days. That shunt was consequently replaced after a ''huge sausage-shaped lump appeared on his head. His fourth surgery involved removing that shunt because it was blocked ''to put in a new shunt which so far is doing its job''.

There have been tears and moments of overwhelming emotion but Eden is determined to stay positive.

''When he went for his first operation I said I am not going to cry but when we got back to the room I was just bawling my eyes out.

''I said sorry for crying to my partner.''

She says the doctors and nurses have been amazingly supportive.

Once they looked after Daxton all night so she could escape the stress of it all.

Another outlet Eden has found helpful is Facebook, where she has been documenting Daxton's progress.

Keeping up with Baby Daxton now has 1545 followers and Eden has been ''overwhelmed and blown away with the support''.

''Everyone has been so supportive and generous. I didn't want to buy any baby items in case he died and I went home without a baby.''

''But people have been so kind and gifted me so many items and I am so grateful.''

The situation has hit the family financially because Devon had to give up his job to stay home to look after Dennis, aged 5, and Dallas, 2.

The couple are now on an emergency benefit after using up all their savings and a Givealittle page has been set up to help them - it has $2960 so far.

For now, Eden is staying strong for her son and family.

Two weeks ago Daxton started smiling and is still being breastfed and gaining weight rapidly. His eyes are focused, where before you could only see the whites as the fluid on his brain pushed them back.

No one knows what the possible outcomes could be but Eden says they prepared for the worst and he is doing better than anyone expected.

She acknowledges the times ahead will be tough.

''I'm hoping he will have a good quality of life. I'd say he'll be in hospital a lot and may have learning disabilities due to brain damage.''

But so far Daxton has held his own and keeps on fighting.

The Auckland District Health Board has been approached for comment but said it could not for ethical and privacy reasons.

* At time of publication Daxton was discharged from Tauranga Hospital and is at home.

What is hydrocephalus and ventriculomegaly?