Fire crews have managed to control a large blaze near Kakanui in rural North Otago.

Firefighters from the Kakanui Volunteer Rural Fire Force were called to the blaze in Happy Valley Rd, near the intersection with Robertsons Rd, inland from Oamaru about 11.20am today.

They were joined a short time later by crews from the Waitaki Rural Volunteer Fire Force.

A Fire and Emergency New Zealand spokeswoman said the approximately 21ha blaze was sparked by a controlled stubble burn-off that started to spread when fanned by strong wind gusts, sending flames leaping several metres into the air.

She said two helicopters continued to dampen a smouldering shelterbelt this evening and crews would remain until they were satisfied the blaze, which was brought under control shortly before 4pm, had been fully extinguished. 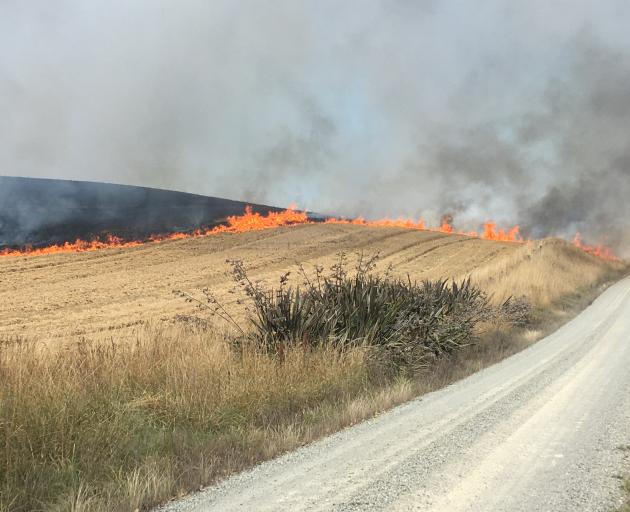 Crews from the Kakanui Volunteer Rural Fire Force were called to the blaze in Happy Valley Rd at the intersection with Robertsons Rd about 11.20am. Photo: Daniel Birchfield
Earlier, an Otago Daily Times reporter at the scene said the fire was close to a property’s boundary of the eastern side of Robertsons Rd.

Large plumes of dark smoke could be seen from the Kakanui township during the blaze.

No property or infrastructure was at risk.

Three pumps and as many tankers were also used to fight the fire throughout the day.