Cars with defective airbag parts to be denied warrants 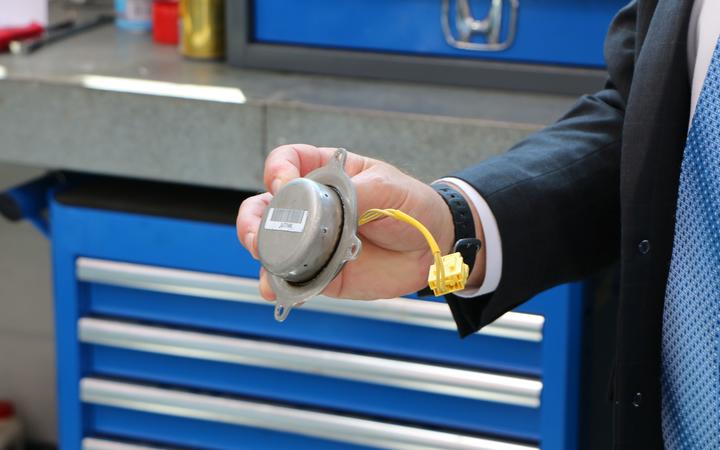 The faulty inflator device in some Takata Alpha airbags. Photo: RNZ
Owners of about 12,000 cars with defective airbag parts will have trouble getting Warrants of Fitness (WoFs) next year.

The government's honing in on slow-moving owners, after instructing the largest compulsory vehicle recall ever for Takata Alpha airbag inflators in April 2018.

A total of 82,300 cars were affected, and Commerce and Consumer Affairs Minister Kris Faafoi said about 85 percent had been brought in for airbag replacements.

Until now the remaining cars might have been able to get warrants, but that is to change.

"If someone goes in for a warrant as of January 1 next year, and they've got a car that's flagged as having an Alpha airbag, but it hasn't been replaced, it won't get a Warrant of Fitness until they change that," he said.

The process to replace the airbags takes just minutes for some vehicles, but can save drivers from hundreds of deadly sharp slivers of metal exploding from the steering wheel or dashboard in a crash.

Any new imports that might have Takata Alpha airbags have been stopped at the border, and Motor Industry Association chief executive David Crawford said most of those remaining on the register were used, imported cars.

They include Hondas, BMWs, Isuzus, Mazdas, Nissans and Toyotas, and those manufacturers will pay for the repairs.

The Takata Alpha airbags have caused injuries and fatalities overseas due to faulty deployment, but to date, there have been no incidents with them on New Zealand roads.

"It's great that it hasn't been in New Zealand, but any one of these at any time could cause damage, serious injury or death. So they're still high risk," he said.

"It's just too dangerous to have them driving around the country."

The minister said reaching every last car wouldn't be easy because of how long some of the cars had been on the road.

"They might not be on the road again, or be on someone's front lawn and not being used anymore," Mr Faafoi said.

"But we're really happy with 85 percent at this stage. We didn't think we were going to get this far when we set out on this journey so I think that's kudos to the way we've worked collectively alongside the sector as well."

If owners think they might need to bring in their cars for a new airbag inflator, they can visit the government's Rightcar website to check. 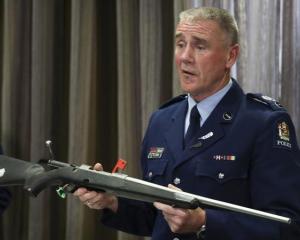