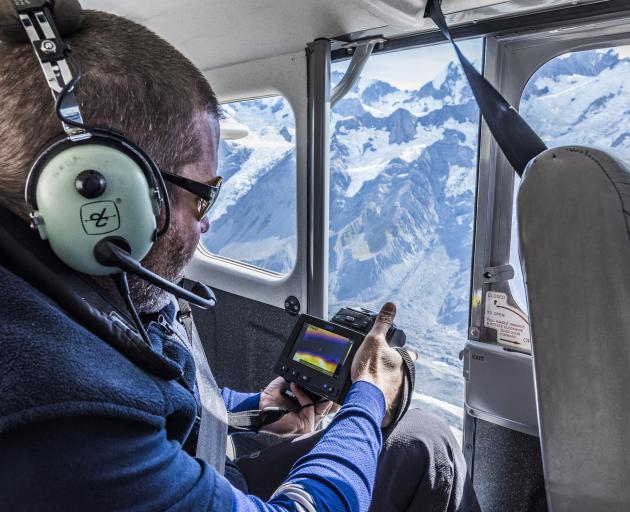 Safely harnessed into position, Niwa climate and environmental applications principal scientist Dr Andrew Lorrey points an FLIR T640 infrared camera out of the open cabin door towards the Tasman Glacier last year, to gather thermal data for the glacier ice, meltwater and the debris cover. PHOTO: NIWA
The Australian bushfires have Niwa glaciologists worried about what they might find, as they prepare to conduct their annual survey of the southern region’s glaciers.

Niwa climate scientists and glaciologists take to the skies every year in March to record how New Zealand’s glaciers are faring in the heating atmosphere.

The annual long-term aerial Snowline Survey records the snowline altitude of up to 50 glaciers across the South Island, using specialised cameras from a light aircraft.

The information gathered over the past four decades has produced a unique and incredibly valuable data set that provides an independent measure of how climate change and variability are affecting New Zealand’s water resources.

Niwa climate and environmental applications principal scientist Dr Andrew Lorrey said the West Coast had been wetter over the past year, and much of the survey would be around how much of the precipitation fell as snow rather than rain.

"And obviously the melt. We want to know whether they’ve recovered or not over the last year. The last two years running, we’ve had two marine heatwaves."

He said one of the bigger things they would be looking at was the impact ash and dust from the Australian bush fires might have had on the glaciers.

"It has some immediate impacts on melt because that black material covers the ice and absorbs more solar radiation, and therefore attracts more heat.

"So you have this instant negative situation where there’s a hot blanket on top of the ice."

Flights over the glaciers will begin early next month, weather permitting.

"I’m going into it with an open mind. I don’t have any current formulation about what this last season has brought."