The Department of Conservation has expressed some concerns about baby orca Toa's gut health.

The orca calf now believed to be aged between 2 to 6 months has been in the care of DoC, Whale Rescue and volunteers since he became stranded at Plimmerton beach on July 11.

DoC marine species manager Ian Angus said the calf did display some short-term signs of discomfort in his gut.

"[This is] likely associated with trying to get the delicate balance of feeding requirements right." 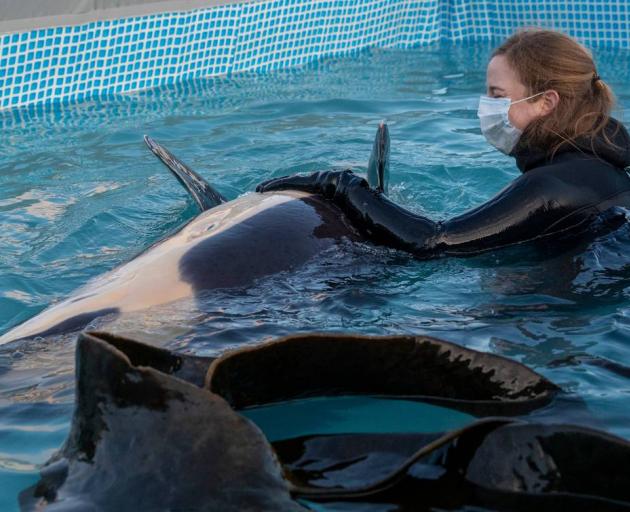 Volunteers encouraging male orca calf Toa to play with bull kelp in his pool at the Plimmerton Boating Club in Porirua. Photo: Mark Mitchell
Angus said today that this resulted in him getting colic two nights ago.

However, last night he remained in a stable state, he said.

"Last night I'm pleased to report was a much more peaceful night, much more behaviours that we had observed previously.

"I caught up with the vets this morning and they're saying the health parameters are all within normal."

The longer the calf is kept the higher the risk of deterioration, Angus said.

Toa has been held in a 32,000 litre temporary pool since last Thursday after a storm threatened to put volunteers and the orca at risk if he stayed in the sea.

Angus said a plan to move him back into the sea is unlikely as another set of bad weather is forecast for the region.

He said the plan still remains to find the orca's pod however, they can travel up to 160km in a day so they could be at a range of locations.

"We are having to cover a big area so what we have chosen to do is a broad scale search looking for public sightings so please do report them."

There is no time limit on how long they are keeping the orca yet, he said.

"We will continue on a daily basis assessing the situation deciding whether we will need external expertise and then on that day make a decision around what's best for this animal."

Anyone who sights orca pods off the lower North Island's west coast – particularly between Wellington and Taranaki – is urged to provide as much information as possible to DoC, via wellington@doc.govt.nz or by calling 0800 DOC HOT.

Essential information includes location of the pod, direction of travel of the animals, and photographs or videos which clearly show the saddle/back markings of the animals and their dorsal fins.