In the ceremony held at the beginning of the full council meeting yesterday, , Cr Lush was watched by his family as he was sworn in.

The debate regarding media protocols came up in a report tabled at the meeting which updated the work being done by the Project Governance Group, established after the findings of an independent governance review . 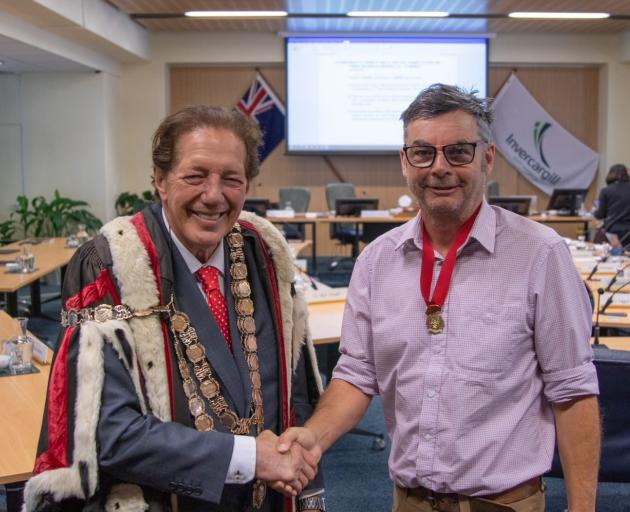 Invercargill Mayor Sir Tim Shadbolt welcomes Marcus Lush on to the council after he was sworn in at an Invercargill City Council meeting held in Invercargill yesterday. PHOTO: INVERCARGILL CITY COUNCIL

Of particular concern to both Cr Lindsay Abbot and Deputy Mayor Nobby Clark was the media protocols.

He said he would comment on decisions of elected members if necessary.

"I will, when the need arises, talk to matters that I feel I should."

Cr Clark said his biggest concern was about the protocol which said elected members agree to focus on council issues and activities when speaking to the media, rather than the actions or decisions of other elected members of staff.

He believed the statement should finish at media, and the remainder be deleted.

There were two rationales behind his reasoning, he said.

The first, was the purpose of media protocols recognised elected members could share their views with the media and have differing opinions.

"The code of conduct that we have within council governs inappropriate comment against elected members.

"The rest of it [the part he wanted deleted] gets very close to me to be a gagging order," he said.

Cr Rebecca Amunsden, who is chairwoman of the working group overseeing media protocols and engaging the public, said it was important not to criticise, belittle or rubbish another person’s opinion in the media.

"Rather than speak about how other people had voted and criticising them, what you need to focus on is justifying why and how you voted the way you did and that’s how you would play the ball and not the man."

It wasn’t about trying to gag people, it was trying to have a positive effect on the reputation of council, she said.

The recommendations of the report were passed with Cr Clark and Cr Abbot stating they were opposed to the media protocols section.

After the meeting yesterday, Cr Lush said he would have abstained from the media discussion, if he had known how to do it.