There are 1110 new cases of Covid-19 in the Canterbury community today and another six virus-related deaths have been reported in the region.

Across New Zealand, the Ministry of Health reported 7441 new community cases on Friday and 29 virus-related deaths.

There are 398 people in New Zealand hospitals with the virus, including six in intensive care. Of the 398, 54 people are in Canterbury DHB hospitals and three are in South Canterbury hospitals. 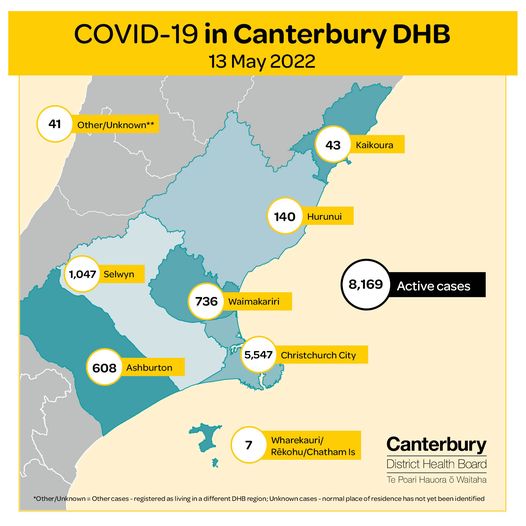 Active cases in Canterbury as of 8am on Friday. Image: CDHB
Today's update was provided by director-general of health Dr Ashley Bloomfield, who is hosting his first press conference in more than a month.

Bloomfield said it was believed half of the actual cases out there were being reported - and some cases that weren't being reported could be because people didn't have symptoms, so weren't testing.

The number of active community cases in New Zealand now stands at 52,826, while in Canterbury there are 8169 active cases.

Today’s seven-day rolling average of community case numbers is 7548 – last Friday it was 7555.

Bloomfield said today it seemed the country had probably reached the bottoming out of cases and hospitalisations from this outbreak and we may be on the way back up, he said.

There was a risk that some people could be reinfected with Covid within 90 days of catching the virus.

"Get that booster if you haven't had it, as soon as possible," Bloomfield said, while urging people to wear masks and stay home if they were sick.

Bloomfield said health authorities had been anticipating and planning for concurrent infections of influenza.

He encouraged people to get a flu jab this winter and noted that mask use protected people from both Covid and the flu.

Many people were eligible for a free flu jab, while for others it was "relatively cheap".

An update on a fourth dose of the Pfizer Covid vaccine would be provided when available, Bloomfield said.