There are 755 new cases of Covid 19 in Canterbury today and eight more virus-related deaths.

The Ministry of Health reported 6362 new cases across New Zealand on Thursday, as well as 663 people in hospital, including 14 in ICU, 113 cases in Canterbury DHB hospitals and 18 in South Canterbury hospitals.

Case rates are starting to trend down nationally, dropping 18 per cent in the past week. There were 97 new cases reported in South Canterbury today.

The health ministry said the seven-day rolling average of hospitalisations was 748. It was 790 a week ago. The average age of those in hospital with Covid is 66 years. There are now 42,974 active cases of Covid in New Zealand. Of the latest community cases 210 people had recently travelled overseas. 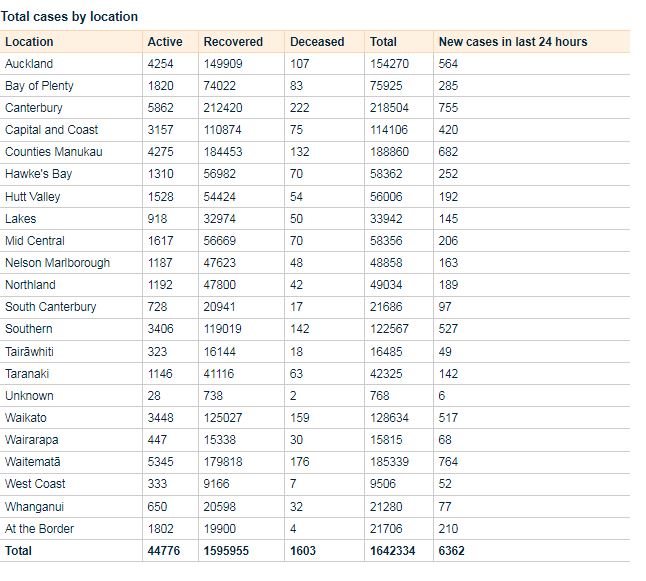 This is the fifth week in a row that the rate has increased. Hospitals remain under significant pressure.

The latest modelling shows we are tracking at the lower end of BA5 for winter, Old said.

It suggests New Zealand has reached a peak slightly earlier than expected. We could still reach 1000 occupied beds in hospital but we are tracking closer to 800.

It made no difference to the number of people vaccinated.

The updated dataset had 233,000 more people in it. Using that new figure the overall double vaccination rate for over 12s drops from 95 to 90 per cent and for Māori 88 to 83 per cent.

Stats NZ had reviewed and endorsed the dataset and it would be updated every six months.

Meanwhile, Statistics NZ has been reviewing the Ministry of Health's use of the Health Service Utilisation 2020 dataset to calculate vaccination rates.

It will report on the difference between the HSU 2020 and its own data and is expected to show vaccination rates are lower than those trumpeted by the Government.

HSU 2020 is considered flawed as it counts those who engaged with the health system during 2020. It was known Māori did so less regularly and when doing so sometimes identified as another ethnicity.

The Herald reported on this inaccuracy in September last year, revealing more than 70,000 people who identify as Māori in Census-based population estimates are not recorded with this ethnicity in the internal database it uses to measure vaccination rollout equity.

The ministry was not using Census population data as the basis for its population estimates. Instead, officials relied on their internal Health Service Utilisation (HSU) database.

This dataset, used only by the Ministry of Health, includes all individuals enrolled with a primary health organisation (PHO), or who have used other health services such as hospital admissions, the emergency department, or filled a prescription, during a calendar year.

However, comparing the current Māori population projections from the 2018 Census to the HSU database for the eligible vaccination rollout (12 and over), there are just over 12 per cent - 73,889 - fewer Māori. The group classed as European/Other is larger in the HSU database than in the Census estimates by nearly the same amount.

A Herald investigation this year also found there were two independent academic projects under way to assess whether Māori lives were needlessly lost to Covid-19 as a result.

There were no links between the cases and no indication of community transmission.

All three cases had been infected overseas.

The monkeypox vaccine is manufactured by one company and is in high demand. The ministry was developing a plan for the vaccine.

Vaccination was important but not the only tool, Chamberlain said.

On the risk to New Zealanders from monkeypox, he said it was still low "very low".

This was based on what was happening overseas.

Chamberlain said from the moment of the first case, there were discussions with Pharmac to procure the vaccine but there was still no guaranteed supply.

A large number of countries were trying to get the vaccines.

Asked about claims the Ministry was too slow on ordering Covid vaccines and if it was now too slow again, Chamberlain said he disagreed and that New Zealand had been "as fast as anyone".

Old said although there was a strong focus on vaccines and antivirals, that was a narrow approach.

There was a good chance here with no community transmission to get ahead of any outbreak, including designing appropriate health messaging, he said.

Chamberlain said if they could they'd take 20,000 doses.

There would not be large amounts of vaccines, and it would not be done in a similar way to the Covid rollout. It would likely be distributed in sexual health clinics.