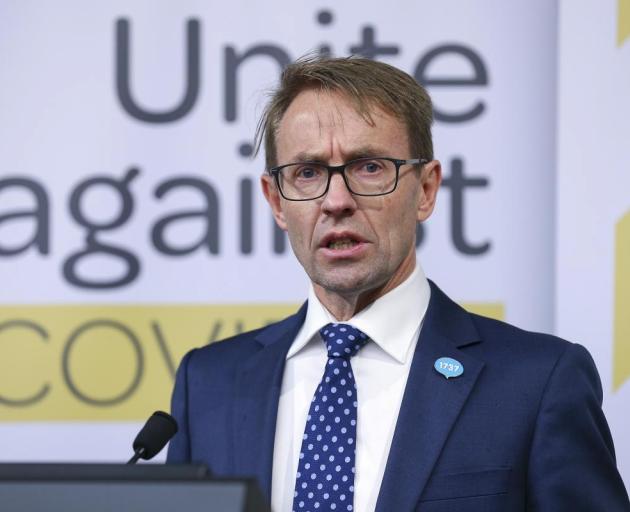 Director-general of health Dr Ashley Bloomfield. Photo: Getty Images
There is one case of Covid-19 in New Zealand among the foreign seamen isolating in Christchurch and no new community cases. Meanwhile genome testing has revealed the origin of the latest community cluster.

This individual was a close contact of a previously reported case from the same group of mariners who had tested positive during day 6 testing and as such was already being closely monitored, the Ministry of Health said in today's update.

Three cases have now recovered, meaning the total number of active cases is 68.

The total number of confirmed cases is now 1,594.

Yesterday our laboratories completed 7,472 tests for COVID-19, bringing the total number of tests completed to date to 1,090,702.

This is the second consecutive day of more than seven thousand tests completed. It is good to see a sustained response to the call for anyone with symptoms to be tested.

The isolated positive case reported today in the Christchurch-based international mariners group, which was a close contact of an existing case, gave the Ministry confidence the standard practice for managing cases and contacts within managed isolation, supplemented by extending the isolation period and additional testing, was the right approach to take in the circumstances.

Day 15 testing will be carried out this weekend of all group members who were not already confirmed cases. All those who met our low risk indicators, which included those who had recovered or had returned consistently negative test results throughout their stay, would be eligible to leave managed isolation from next Tuesday November 3.

Genome sequencing, carried out in Queensland, of one of the Covid-19 positive crew members of the Sofrana Surville had returned the genome subtype as three recent cases from the Auckland maritime company from whom we have genome sequencing.

The Brisbane sequence was one mutation earlier than the genomes sequenced from our New Zealand cases.

"This supports our view that the index case in this group was infected by on board exposure to new crew members who joined the Sofrana Surville in Auckland.

"We continue to investigate the exact circumstances where the infection might have occurred to inform any changes to protocols designed to keep workers and our communities safe."

Today health minister Chris Hipkins moved to further tighten the risk of the infection spreading through the border with the introduction of compulsory testing for all foreign maritime crew.

It will begin from next week with any maritime crew in managed isolation for more than 24 hours requiring a Covid-19 test.

Meanwhile New Zealand authorities were continuing to work with their Japanese counterparts regarding a New Zealand child who returned a weak positive Covid-19 test after they arrived in Japan last Friday.

At this stage health officials suspect this was a historical case or a false positive result, and were due to provide further details when they became available.

As of yesterday there had been no community cases for seven days with all new cases contained in managed isolation having recently arrived in New Zealand from overseas.

There were 1593 confirmed cases in New Zealand since the start of the outbreak in February.