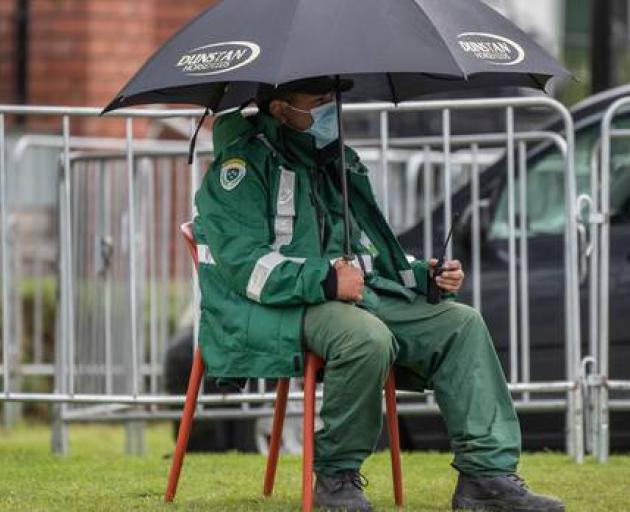 Security outside the Novotel Hotel in Ellerslie. Photo: NZ Herald
The Ministry of Health has revealed one new case of Covid-19 in managed isolation - a woman in her 20s staying in Christchurch.

Today's new case is a woman in her 20s who arrived in New Zealand on 4 July from Rome, via Doha and Sydney.

It has been 72 days since the last case of COVID-19 was acquired locally from an unknown source.

She had been in managed isolation at the Christchurch Commodore Airport Hotel and is now in quarantine. The woman had previously been identified as a close contact of another case.

As a result, and as per protocols for testing of close contacts within the managed facilities, this woman was retested on day 6 and tested positive.

This case brings our total number of confirmed cases to 1194, which is the number we report to the World Health Organization.

There are no new recovered cases today, which means the total number of active cases is 25.

The Minsitry said laboratories completed 1824 tests yesterday, bringing the total number of tests completed to date to 428,600. The seven-day rolling daily average of tests is 2,053.

Yesterday, the Ministry of Health announced one new confirmed case of Covid-19, a woman in her 20s who arrived in New Zealand on July 2 from London, via Doha and Sydney who had tested positive.

Meanwhile, details have emerged of the fourth person who escaped from a Covid-19 managed isolation facility, broke a window and knocked on the doors of several nearby homes in the middle of the night before being found by police.

The person in their 60s broke free of security measures at the Waipuna Hotel and Conference Centre in Auckland, less than nine hours after Hamilton escapee Martin McVicar, 52, appeared in court facing a charge of intentional damage of a 52-inch TV and intentionally failing to comply with an order under the Covid-19 Public Health Response Act 2020 by leaving a managed isolation facility and purchasing alcohol.

Air Commodore Darryn Webb, head of managed isolation and quarantine, revealed yesterday the person escaped after breaking and then climbing out of a window.

They then climbed perimeter fencing shortly after 11pm on Friday.

"They were picked up by police at about 12.15am and immediately returned to the facility where they were put under guard," Webb said.

The National Party said the Government's ineptitude was putting the public at risk.

Party spokeswoman for Covid Recovery Amy Adams said the public were right to expect the Government to be able to keep people from getting out of the quarantine hotels.