Dr Bidrose is leaving the organisation to take up an a new role as AgResearch chief executive in Christchurch.

She has been the council's chief executive for almost seven years and announced her resignation to councillors and staff this afternoon.

She will leave the council on July 17 and join AgResearch, based at its Lincoln Campus, on July 27.

The Crown Research Institute is responsible for research centres and farms across the country, including the Invermay campus in Dunedin. 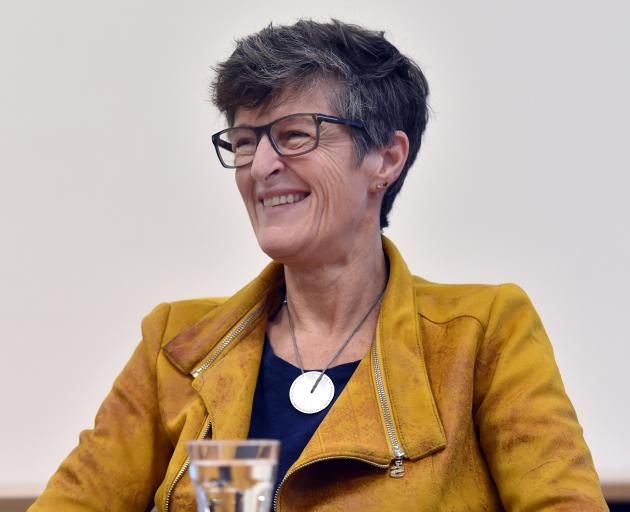 Sue Bidrose says she's confident she's leaving the DCC in good health, guided by staff who cared deeply about the city and its ratepayers. Photo: Peter McIntosh
Addressing media at a press conference this afternoon, Dr Bidrose said it was her third year in a row "not knowing what the end of the year would hold.”

"It’s time for me to hand over the reins to someone else now. AgResearch will probably be the last big job I take on."

She said the hardest part of her time in the role was during the investigation into the $1.5 million Citifleet fraud in 2014.

Brent Bachop, the man at the centre of the fraud, took his own life as pressure mounted on him about irregularities found within his department.

"It was awful, very hard, Dr Bidrose said.  "But it became a springboard to us being better."

She said being under the scrutiny of council and the public was difficult at times.

"It can be hard being questioned."

"Aaron's vision for the city is fantastic, we've got a great bunch of senior councillors who will drive the city into the future."

Mr Hawkins said the news was "disappointing and sad” for council.

"It’s important to note we’re not losing her from the city. AgResearch is an important part of the city.”

Sue Bidrose was involved in the fight to keep jobs at AgResearch's Invermay campus on the outskirts of Dunedin. Photo: Peter McIntosh
'GREAT TIME TO WORK IN SCIENCE'

In a statement sent to media earlier, Dr Bidrose said she was excited to be returning to AgResearch - the place she began her working life as a young laboratory technician.

"Now is a great time to be working back in science.  The whole country has seen how important good science is for the well-being of New Zealanders, and AgResearch is at the forefront of that good science."

Dr Bidrose said she was confident she would leave the council with the organisation in good health, guided by staff who cared deeply about the city and its ratepayers.

"I leave the DCC when it is in really good heart with an excellent, hard-working Mayor and senior Councillors committed to doing the best for the city.

"I wanted to create a really modern, best-practice, A-grade public sector organisation and I feel like I have done that.

"Now it’s time for someone else to take the DCC - and the city - forward."

She was proud of the changes introduced during her time in charge, many of which – like increased investment in repairs and maintenance – did not always get the attention they deserved.

The results were recognised recently by the Office of the Auditor-General, which selected the Dunedin City Council as one of a small group of exemplars to include in its guide to best practice for developing workplace integrity and public service ethics.

And, while she would be relocating to Christchurch, she was looking forward to continuing her association with Dunedin and Invermay in her new role.

"It is exciting for me to have Invermay as one of my campuses, having helped in the fight to save it. The staff there know that I know they matter to me."

Mr Hawkins said while it was sad to see Dr Bidrose go, the council's loss is the wider public sector’s gain.

"The city has been incredibly lucky to have a CEO of Dr Bidrose’s calibre, who understands and appreciates the wellbeing of our city in its broadest sense - social, cultural, environmental and economic.

"She has also been of great value to me personally, both as a Councillor and in my new role as Mayor. We all thank Dr Bidrose for her efforts and wish her every success in her new role."

Dr Bidrose joined the council in 2010 as General Manager Strategy and Development, following earlier roles at the Waitakere City Council, the Ministry of Social Development and as a director of Workwise, an agency assisting people with mental illness into work.

In 2013, she became the council's chief executive, replacing Paul Orders.

The appointment of an Acting Chief Executive would be considered by the council at its next meeting on June 30.

The search for a permanent replacement would be advertised in due course, but the statutory requirement to run a recruitment process this year meant the process was already under way.

However, it appears not all councillors were told ahead of the announcement.

Cr Andrew Whiley said he had heard the rumour Dr Bidrose would not apply to stay on, but the news was a surprise to him when he was contacted by the Otago Daily Times at 3pm today.