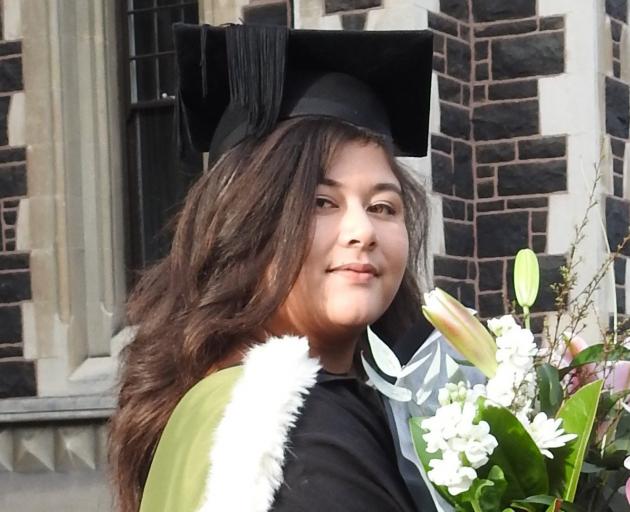 Charlene Hong Hue Phuong on her graduation day.PHOTO: SUPPLIED
A family has been left "devastated", "crushed" and "distraught" in the wake of a crash that killed a young South Island woman and her mother-in-law at the weekend.

Charlene Hong Hue Phuong (23) and her mother-in-law, Fay Lesley Leota, were killed in the head-on crash just south of Waihola, in State Highway 1, on Saturday morning.

Three others were injured, two critically and one seriously.

His lawyer sought an adjournment without plea. He said his client fell asleep at the wheel and admitted causing the crash.

The teen was declined bail, and remanded in custody to appear in court again on November 15.

Ms Phuong’s older brother, Bobby Phuong, of Christchurch, said the two women were travelling in the same vehicle and were part of a family convoy driving to Queenstown for a family day trip over Labour Weekend.

Mr Phuong said Ms Phuong was the most incredible sister anyone could imagine.

‘‘She was just everything.

‘‘She was bright, bubbly, really outgoing.

‘‘She was the youngest of us three siblings, but I felt like she was our rock, the solid foundation of our family.

‘‘She was the one that kept us together, kept us going, kept us as one solid unit.

‘‘She was just brilliant.

‘‘She was so out there, so adventurous, ever since she was a little girl.’’

The 13-year age gap between the two made Mr Phuong feel like Ms Phuong was closer to
a daughter than a sister, he said.

He would take her on adventures around Australia, where the family grew up.

That adventurous side stayed with her, he said.

‘‘She was so courageous.

‘‘She just knew what she wanted and went for it. She wasn’t afraid.’’

Ms Phuong had recently graduated from the University of Otago with a degree in surveying.

Ms Phuong worked multiple jobs, was a member of a kapa haka group and remained active in her worship in addition to raising her son.

Her son had not yet processed what had happened, Mr Phuong said.

‘‘He knows they’re gone, but I don’t think he’s totally there yet.

Covid-19 restrictions meant that friends in Auckland, along with Ms Phuong’s brother and father, who were in Sydney, would be unable to attend the funerals.

‘‘Especially the ones overseas who can’t come here and get closure.

‘‘It doesn’t help the grieving process to be so far away.’’

A Givealittle page has been set up by close friends of the victims, who said there were ‘‘two less beautiful, shining lights in this world’’.

The page described Ms Leota as ‘‘the strongest and most resilient of mothers’’ to her seven children.

The page stated all proceeds raised would be split evenly between both the families, to ‘‘help with the upcoming expenses during this extremely difficult time’’.