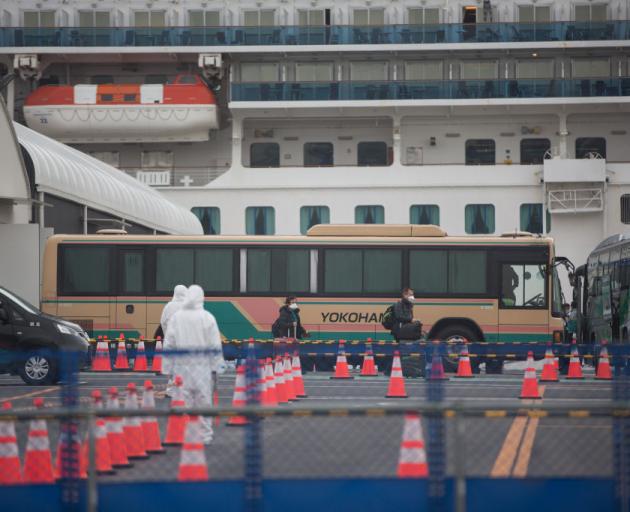 Former passengers of the Diamond Princess cruise ship leave after spending weeks on board in quarantine due to fears of spreading the COVID-19 Coronavirus in Yokohama. Photo: Getty Images
Four Kiwi cruise ship passengers who have tested positive for coronavirus are in a stable condition in a Japanese hospital.

Director-General of Health Dr Ashley Bloomfield said there were no confirmed coronavirus cases in New Zealand but still believed it was likely New Zealand would get a case "at some point".

Six Kiwis who flew to Auckland on an Australia-assisted emergency flight home last night after being evacuated from the Diamond Princess are in quarantine at the military base at Whangaparaoa.

"They're all in good spirits today and have been checked by a doctor and show no symptoms," Bloomfield said.

It emerged yesterday that 12 evacuees from the Diamond Princess were barred from boarding the emergency flight home.

Ten Australians and two Kiwis tested positive for the Covid-19 coronavirus just before they boarded the plane.

They were barred from taking the charted Qantas flight, which left Tokyo at 5am NZ time and touched down in Darwin just before 11.45am.

Earlier, two other Kiwis were diagnoses with the disease.

Bloomfield said New Zealand had ordered 1.46 million doses of the flu vaccine, which is up on the previous year.

"One of the key things people can do is get an influenza vaccination this season. It will start to roll out from April.

"More people vaccinated means less in hospital. So an unashamed plug for vaccinations this year."

He said he was aware there was concern from universities about students who can't travel here.

"But what we are focusing on first and foremost here is protecting the health of New Zealanders.

"(And keeping it out) has given us time to see how this disease is evolving."

He said that as at midnight February 19, 8487 people had travelled from or through China in the prior 14 days, 4461 will have completed their 14 days self isolation.

So more than half of the people who have come in from China since Febuary 3rd have completed that 14 day period.

He quoted Professor David Murdoch, an expect in infectious disease, from a paper published in the NZ Medical Journal this morning.

"This is a time when there are some pretty tough decisions to be made by public health authorities and often there's no right or wrong. Everyone's working with the best available information which is changing very rapidly."

He added: "I think that nicely describes the situation we're in, why we've taken a precautionary approach and to date our measures have been successful in preventing us having a COVID-19 case and we're now even better prepared to deal with an infection if we get one here."