Frozen and furious after power failure 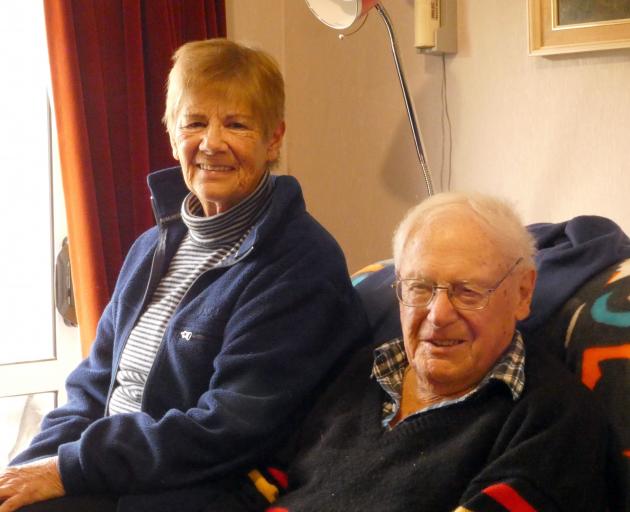 Neighbours Rose-Anna Wakefield and John Irvine were left with no means of heating or cooking in freezing temperatures at their council-owned flats. PHOTOS: JARED MORGAN
Clyde's "Third World" electricity infrastructure has sparked fury after 1200 homes and businesses lost power for about nine hours on Sunday.

Businesses have been left counting the cost and residents shivered in temperatures as low as -9.9degC — the coldest day of winter so far — after the lights went out in and around the Central Otago town about 7am.

Power was progressively restored from about 3.30pm, too late for most hospitality businesses, and elderly residents were left with no means of heating or cooking for much of the day.

Vincent Community Board deputy chairman and Clyde resident Russell Garbutt said the operational transformer at the Clyde Earnscleugh Substation failed and the backup transformer had been relegated to little more than "scrap metal" years ago.

A mobile substation stands at the Clyde Earnscleugh Substation as a backup should the single operational transformer fail again in a repeat of Sunday.
"It used to be if there was a failure in the first transformer, it switched to the second and all residents would notice was a flicker of the lights."

Clyde-based former Aurora professional engineer Steve Tilleyshort, who worked for the company for 17 years, said he had completed the design to switch the substation from 6.6kv to 11kv but Aurora had not gone ahead with the plan.

For the hospitality industry the blackout came on what was traditionally the busiest day of the week.

Olivers Restaurant and Bar owner David Ritchie estimated losses for the day amounted to about $4000 in lack of revenue, staff wages, and wasted food and post-lockdown it was a cruel blow.

Olivers Restaurant and Bar owner David Ritchie says Sunday’s power cut came at the worst possible time for Clyde, as businesses emerge from lockdown and attempt to recoup losses.
Post Office Cafe and Bar owner Jackie Biemond said she had 80 people booked for lunch and estimated her losses also sat at about $4000 but she reopened after power was restored.

Paulina’s Restaurant owner Paulina Corvalan said she had managed some trade due to having a woodfire oven but opted to close for the evening and cancel all bookings.

Service industries were also affected. Dunstan Motors owner Ann-Marie Lines said takings on a Sunday were typically around $3000 to $4000.

Elderly residents in Clyde’s council-owned Annan Flats had toughed it out with a lack of heating, 90-year-old John Irvine said.

His neighbour Rose-Anna Wakefield (80) drove to Alexandra for food for her and her neighbours.

An Aurora Energy spokeswoman apologised to customers, given the extremely cold weather in Clyde, and said the second transformer in the substation was never operational as a backup.

"Our backup for the single transformer on site is the mobile substation."

The mobile substation would remain in Clyde while further maintenance was completed, she said.

Affected customers would receive a $50 credit.