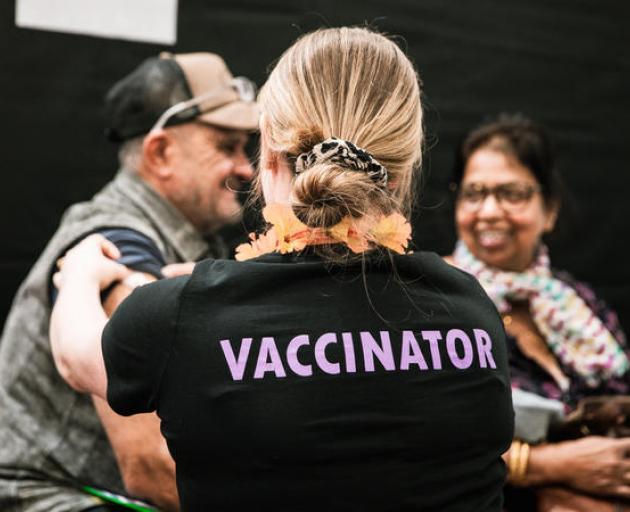 Group 4, the general the population, become eligible for a Covid-19 vaccination on July 28, in order of age bands. Photo: RNZ / Samuel Rillstone
A GP says anyone expecting to suddenly get the Covid-19 vaccine now it has become available to the general population are in for a big disappointment.

From today, the first portion of the two million people in group 4 are eligible to receive their doses, beginning with 60 to 64-year-olds.

But there are warnings it could be a while before the general public will actually get their shots.

The government has been pointing to July as the time when the programme will really ramp up.

Border workers, frontline workers and the vulnerable - people in the first three groups - have been the priority until now.

Group 4, the rest of the population aged 16 and over, become eligible today with with those aged 60 and over up first, 55-year-olds and over to follow in two weeks, and other age bands next.

Westmere Medical Centre GP John Cameron is not optimistic there will be a sudden increase in vaccination numbers.

"It's not going to happen. We're still working through group 3 at the moment. If you're looking at group 4, I think you might be able to book something, but it won't be eligible for you to get for a significant period of time from now."

That is despite "huge demand" from group 4 patients for the jab at his clinic.

When they come to him asking when they will actually be able to their shots he tells them he does not know, but believes not for another month at least.

Cameron said that was because there were simply not enough places allowed to give vaccine - his clinic included.

He said the procedures for giving the vaccination were "incredibly onerous" compared to other types of vaccine, and were proving a "significant barrier" to GPs being able to pitch in with vaccination efforts.

He said the government and officials needed to start being more upfront with the public about how long they would likely to be waiting or risk sowing distrust.

"So maybe a little bit of hard truth, a bit of hard noise in there to say 'this is where we're at, this is the troubles that we're having'.

There is nothing worse than over-promising and under-delivering. I think that's where we are at the moment though."

'You wonder what the hell's going on'
Central government sets the overall vaccine rollout timeline and it is up to the individual DHBs to deliver it.

There has been varying degrees of success getting to those in the first three groups in the different regions, adding to people's confusion.

One person left scratching his head is Bert, who is in group 3 and lives south of Christchurch.

"I rang them up last couple of days and I got sick of waiting on the end of the phone listening to an answering machine.

"I finally got hold of them today, and they said, well, there's nothing available in my area - I'd have to ring my local doctor.

"I rang the local doctor and they said, well, they were only doing 85-year-olds-plus at the moment.

Fears vulnerable will be left behind
The 0800 number was launched last week and the nationwide public Book My Vaccine website can be used for online bookings.

GP and Māori public health academic Dr Sue Crengle said poor and vulnerable people - particularly Māori and the elderly - might struggle to use the services to get an appointment.

She rang the 0800 number to book a vaccination for an elderly man and was told she needed to provide an email address and a cellphone number to confirm the appointment.

"And I said, 'well, you know, he doesn't have an email address, and his vision is such that he can't read text and doesn't use a phone.

"So in the end I gave them mine.

"But there must be people around who are in similar situations ... and they don't have have family or friends that can do that for them."

She is also worried that the shift to group 4 will divert officials' attention and resources from the vulnerable and hesitant who still do have their shots.

Just 20 percent of those in group 3 have had their first dose.

Crengle wants the government to hit the pause button on group 4 for a few weeks, to get those numbers up.

Government's credibility 'absolutely on the line'
University of Auckland Professor of Medicine Des Gorman said the government had been promising for months the rollout would really ramp up from now - and it needed to make good.

"Contact tracing is nowhere near as good as it needs to be, the borders [have been] a real problem in terms of leaking.

"So really, the government's credibility in terms of how it manages Covid really hinges upon them delivering a vaccination program that's extensive enough to the point that they can then move towards reintegrating with the world.

"So I think their credibility is absolutely on the line here."

It wants to vaccinate everyone over the age of 16 by the end of the year. That is more than seven million doses all up.