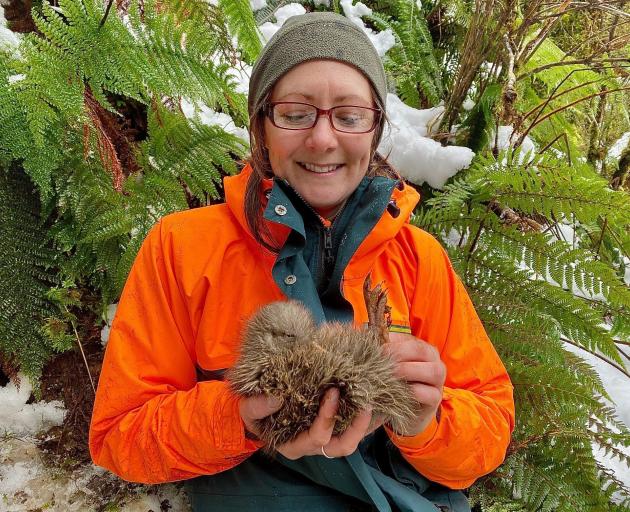 A Department of Conservation ranger holds the first kiwi chick of the season from monitored nests at Shy Lake, southwest Fiordland. PHOTO: TONY PRESTON
A Department of Conservation ranger who has monitored the survival of kiwi chicks in Fiordland for three years is hoping more birds will survive this breeding season, thanks to reduced stoat numbers.

In late June, Doc did an aerial 1080 drop covering 40,000ha over the north and south peninsulas of Wet Jacket Arm.

Results had so far shown a significant decrease in stoats, the No1 predator of kiwi chicks in the area.

Ranger Tim Raemaekers said until this breeding season, it had been the same story for the past three years: chicks hatched, only to be eaten by stoats.

Their longest-lived monitored chick last year made it to only 7 weeks old, he said.

"When you extrapolate that figure over the wider area, which also hasn’t previously had any type of predator control, it paints an increasingly grim view for the future of the Fiordland tokoeka kiwi."

The problem was sustaining the population.

"Adult kiwi are a pretty solid match against a stoat, but if hardly any of the new chicks are making it to breeding age, we’ll end up with an increasingly geriatric population, and no new adults to replace them."

Raw figures from Landcare Research trail cameras before the 1080 drop showed 162 stoat detections in a small area at Shy Lake, in the Wet Jacket region.

After the operation there were just five.

Since the drop, stoats had also not appeared on the trail cam footage from kiwi nests.

This was a "huge difference" from previous years, when 90% of the monitored nests were visited by stoats.

The Southern Fiordland tokoeka was threatened and nationally endangered.

Mr Raemaekers said it looked as though "these chicks will have the best chance in decades of survival".

Doc operations director Aaron Fleming said the drop was not without its challenges.

Three monitored kea were found soon after the drop.

"At a population level, we know kea do better with 1080 than without, but it doesn’t make the loss of individuals any easier."