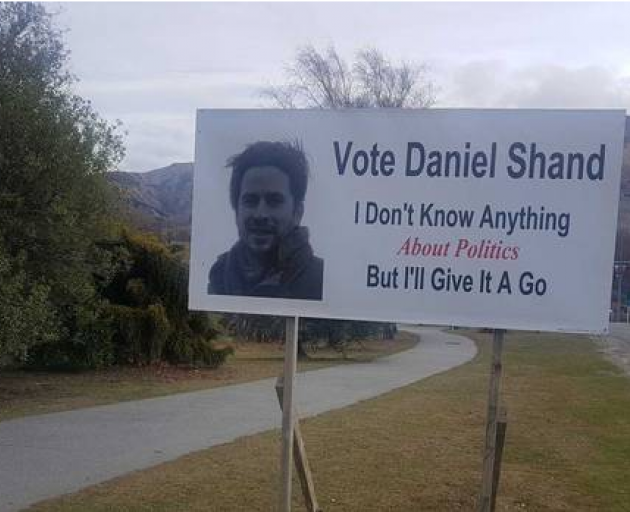 Daniel Shand is asking for people's votes, saying he'd 'probably make a pretty good MP'. Photo: Vera Alves via NZ Herald
If you're tired of election candidates that over-promise and under-deliver, then Waitaki candidate Daniel Shand might be the man for you.

The candidate, whose first billboard has gone up in Wānaka this weekend, says he doesn't know anything about politics but is keen to give it a go.

In a letter to the Waitaki electorate, which has also been posted on the "Vote Daniel Shand" Facebook page, the candidate says he doesn't currently have any positions.

"I'll make something up later. Politicians don't normally do what they say anyway," he wrote.

"Ring me up and tell me what you want and I'll probably just do that," the aspiring MP added.

"I don't know anything about politics, but as this never stops anyone else from getting involved in government so I'll give it a go. It seems the less experience you have the better you'll do. I probably have the least experience of anyone running so perhaps this will give me some kind of advantage."

Shand, 37, says he will be putting more campaign billboards up over the next few days and will also announce a tour of the different towns in his electorate so he can talk to people about his campaign.

"I'm not going to give any speeches, I don't want to tell people what to do. I want them to tell me what to do," Shand told the Herald.

Shand, who moved to Cromwell a few months ago from Whanganui, says he has now lived in the area for "several months" and feels he has "enough of an idea of the place and its people to represent them in Parliament".

"It's a fine and often overlooked province, it's not a bad place. While running over the next few weeks I'd like to add that I'm also single and I'd like to hopefully meet a nice lady one day. I thought maybe while running for Parliament," he added in his letter.

"I might meet a few new people and maybe a nice girl. So if you're not interested in voting me into Parliament maybe we could go out for a coffee instead."

He invites people in his electorate to call him up to discuss ideas and let him know what they want from the Government.

Shand says that he is very keen to be elected and that is name will be on the ballot. He is not worried about his lack of experience impacting his political career. "What I don't know, I'll learn," he said.

His billboard has been shared on social media where people have pointed out Shand probably would not be the least qualified person to ever try to become an MP.

"He seems rather over qualified, but if elected, that'd change," one person joked on Twitter.

"At least he's honest. That puts him ahead of some of his competitors," someone else commented.

It is not Shand's first attempt at running in a local election. In 2019, he ran for the local council in the Whanganui District, where he promised he'd make "everything better".

He says that campaign went "very well" and he made "quite an impression".

Now in the Waitaki district, he continues his political aspirations, hoping people will vote him in on September 19. "I've got as much chance as anyone else," he added.