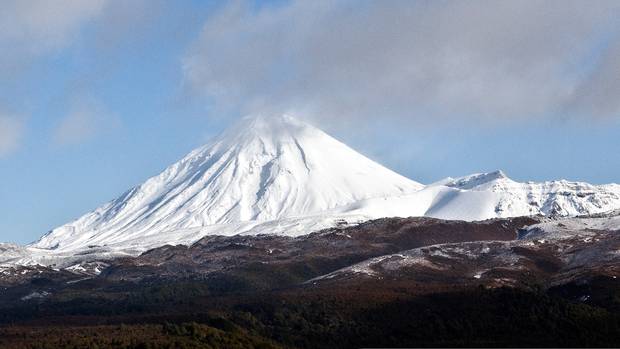 Mount Tongariro photographed in July 2016. Photo: NZ Herald
Prathiba Yajaman-Puttappa was waiting in the carpark for her husband when she was asked by the others in his group if he had made it down from the Tongariro Alpine Crossing.

Sateesh Babu Halehally-Chikkanna, from Bangalore in India, had set out with three relatives from the Ketetahi carpark with the intention of crossing the alpine trek in October 2018.

But the 54-year-old civil engineer was ill-prepared and lost his life after being separated from the other men.

Coroner Tracey Fitzgibbon has ruled he died of hypothermia but there were several factors that contributed to his death, including insufficient planning, lack of experience and not understanding the risks.

Halehally-Chikkanna wasn't that familiar with the crossing but had spoken to his India-based son Nihal, who had researched the trip for him. It's understood Nihal told his father during that call that it wasn't an easy trek.

On the morning of October 1 Halehally-Chikkanna, Akash Prasad, Mahesh Gangappa and Madhush Prasad set off to do it anyway, starting at the Ketetahi end of the crossing.

This requires a much longer climb to the summit than the usual starting point.

The only real preparation was when Akash Prasad checked the forecast which showed a good chance of rain but he did not consider the wind or that it might snow.

Halehally-Chikkanna was a bit tired when the group emerged from the bush, so they told him to rest while they carried on.

According to the findings, Madhush Prasad told him if he became too tired to continue he should go back the way they came and call family to pick him up.

The three men continued on to Ketetahi Hut without him, with the weather deteriorating as they arrived at Emerald Lakes.

The sodden trio then deviated from their original plan to seek shelter at Oturere Hut. They called 111 asking for help before texting Halehally-Chikkanna's wife to say they hadn't seen him and he must have turned around and gone back to where he was dropped off in the morning.

After being rescued the men contacted his wife again to see if she had picked her husband up but she hadn't heard from him.

His body was found the next morning at Red Crater Ridge about 4m from the side of the track. There was a muesli bar, mandarin skins and some wet food nearby. He wasn't wearing a hat or gloves and only had on a lightweight hooded jumper, track pants and sneakers.

The Coroner ruled poor weather, lack of experience, the decision to split up, insufficient planning and clothing were all deemed to be factors that contributed to the fatality.

Senior Constable Barry Shepherd recalled how the search effort was not prolonged but it was a significant undertaking among blizzard conditions.

It certainly had an impact on those who found the dead man, he said.

"The fatality did not come about as a result of one thing. It's when all the holes line up in the Swiss cheese, that's when there are problems."

It was unorthodox for the group to start from the northern end of the route and they were also poorly dressed for the environment, he said.

When wind chill was factored in it would have been very cold when Halehally-Chikkanna's body was discovered, he said.

"My message is the same as it is then: Wear appropriate clothing, keep an eye on the weather, stick together and be prepared to turn back."

Most people had a safe experience despite the crossing being well-known as a hotspot for incidents and recording the highest number of annual tramping search and rescues, he said.

In reviewing the incident the MSC identified 10 contributing factors that all played a role in the tragic events of that day but the critical learning points were threefold, he said.

"Even without factoring in the poor weather, the decision to wear light cotton clothing with no warm or waterproof layers meant the party was exposed to the serious risk of hypothermia," he said.

Secondly was around the flawed decision to split up, Daisley said.

"Sadly, this choice meant Mr Halehally-Chikkanna had no one to help him, was alone in extremely poor weather, and meant his remaining party had no idea where he was or how he was doing."

And lastly, if the group returned the way they had come they would have almost certainly found Halehally-Chikkanna, he said.

The MSC has made the following recommendations to all walkers, hikers and trampers in a bid to avoid a tragic repeat of this situation:

• Always thoroughly plan your trip, seek help from others if the location is new to you

• Always be prepared to turn back or alter your plans, have a plan B organised

• When setting off to walk as a group, travel together for the entire journey. Decisions to separate should only be made in an emergency situation, and even then, the risks should be evaluated and mitigated. The most vulnerable people in the group should never be left alone.