'Just boys with their toys': Landowner makes light of earthworks 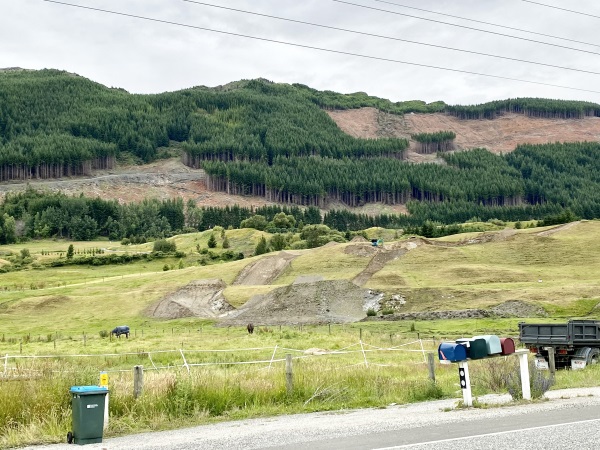 Mike Robb says these jumps on his property, currently under investigation, are a matter of "just boys having a bit of fun". Photo: Mountain Scene
A Queenstowner is batting away concerns about mountain bike jumps on his Malaghans Rd property.

Head council planner Tony Avery says "our enforcement team has been notified and is currently looking into the matter".

Landowner Mike Robb confirms he’s received a letter from a council official after concerns were raised over possible non-complying earthworks on his land.

"Apparently you’re allowed to shift 400 cubic metres — I believe [the jumps] are well inside the 400 limit, and there shouldn’t be any issues with compliance with the district plan."

He explains his mountain biking son, who’s now 23, has wanted to build some jumps since he was young.

He says he started out last summer with "hand-digging stuff" but now has a mate with a digger who’s recently helped out.

"It really just comes down to boys with their toys."

Robb admits the jumps are "sort of professional-sized, but that’s the crowd he hangs with, and it’s just boys having a bit of fun, basically".

"A lot of it is not earthworks, it’s just killing off grass to make the runs."

He says as grass grows back up, "just the landing areas and the tracks running down will be visible".

"The rest of it will sort of return to what was pre-existing, effectively.

The whole issue will be greatly reduced."

Poplars planted along a water race will also limit what can be seen from the road, he adds.

It’s understandable, he says, some people may be concerned when they see "lots of bare dirt", but "other people, of course, think it’s awesome".

"No one complains about a slash being put through the mountainside for a road to be put in.

"At the end of the day it’s just private property, it’s a private thing.

"Yeah, it’s big, but it will be minimised as the grass grows back over things, and you won’t really notice it.

"Look across the other side of the road to Millbrook and see what’s going there."