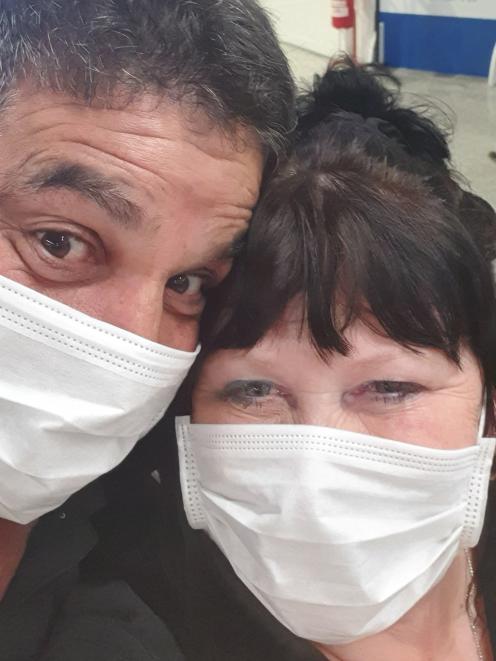 Therese Mitchell and Brett MacDonald contemplate their ruined trip at Rome Fiumicino Airport. PHOTO: SUPPLIED
A tour group of New Zealanders have been left stranded at an airport in Italy after being told they cannot travel through Australia because of Covid-19 restrictions.

"It’s like being in an apocalypse movie; people look bewildered and very scared."

The group of 44 were supposed to have enjoyed a 17-day tour of Rome, but their trip was cut short on the first day and they spent the next four nights confined to a hotel.

Italy has been put on lockdown because of the Covid-19 pandemic and the Italian prime minister has urged people to stay indoors.

The group, who were on a TripADeal tour, were told they would be flying home early via Abu Dhabi and Sydney.

However, when they arrived at Rome Fiumicino International Airport they were told the Australian Government had refused to allow them to transit through Sydney, Mrs Mitchell said

"So the Australian people went off to board, but the Kiwis were left bewildered and not knowing what to do next."

The Australian Government banned foreign nationals from travelling to Australia from Italy on Wednesday.

Mrs Mitchell and her husband, Brett MacDonald, have managed to book flights home via Doha at their own expense, but she said others could not afford to do the same and were stranded.

She said being in the airport was scary, because the Italian police boisterously separated people if they stood too close together as the threat of Covid-19 loomed.

The New Zealand Embassy has offered some advice, but Mrs Mitchell believes the Government needed to do more and has called on Prime Minister Jacinda Ardern to speak to Australian officials.

"She has contact with the Australian PM. Tell him to let our people come home. They don’t want to stay, they just want to get on a plane and come home."

The Ministry of Foreign Affairs and Trade confirmed the embassy had provided assistance and warned all New Zealanders they could not enter or transit through Australia unless they resided there.

A spokesman said: "We encourage all New Zealanders overseas to register on SafeTravel."