'Mandate exists for Labour'; Govt to form in 3 weeks: Ardern

Labour leader Jacinda Ardern says she expects to form a government within three weeks - but won't comment on whether the Greens will be part of that government.

"My expectation is that we will form government within the next two to three weeks," she said.

"We clearly have a mandate on behalf of New Zealand to crack on with government formation."

Ardern said she wanted to "talk to the Greens" but "the mandate does exist for Labour". 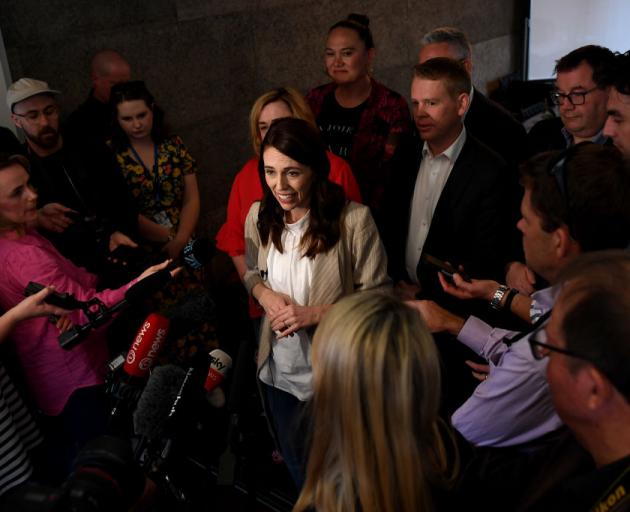 She said there was a range of options for agreements with the Greens.

She didn't want to draw any conclusions at this point but said she'd worked to form consensus.

Ardern was confident there was enough talent to fill ministerial portfolios.

She said she wanted to balance experience with the new talent.

"It's fair to say we have a very talented team of people coming into this term in government."

She said while she wanted consensus, she also wanted "straightforward arrangements" for this term.

Result exceeded expectations
Ardern said she wasn't in shock with the result because they'd worked really hard for a strong mandate.

"In terms of the numbers ... it did exceed my expectations. I think that is fair to say."

Ardern said there were a number of Covid priorities she wanted to progress by the end of the year and there would be other pieces of work which wouldn't come as a surprise.

Ardern used the example of the business loan scheme as something they could "crack on with" without having to get consensus with their Cabinet partners.

He'd given his life to public service, she said. Ardern said she hoped there would be an option for Peters to have a valedictory speech.

Ardern said she wouldn't discuss publicly whether she was considering giving Peters a knighthood.

She's had messages from Australian PM Scott Morrison - they have a wager on the result of the rugby tonight - and the leaders from Denmark, Canada, the United Kingdom about her win.

On the cannabis referendum, Ardern said it "felt tidier" to say how she voted when the result came through.

She said she would be honest about her vote even if she was on the losing side.

When asked whether she'd had a sleep in: "I was up dealing with Covid."

The Ministry of Health earlier this afternoon confirmed an Auckland-based ports worker had tested positive for Covid-19, but Ardern said there was nothing in the latest case to suggest there was a need to move restriction levels.

She said she's confident there was enough testing happening at the ports.

"It is an example of the system working," she said.

The man is in quarantine and four household contacts are in isolation.

The Ministry of Health confirmed today an Auckland-based ports worker tested positive. Minister of Health Chris Hipkins was advised at 6pm on Saturday - an hour before polls closed in New Zealand's general election.

Hipkins said he did consider whether to make the news public about the community case last night but it was "usual" for it to be announced at 1pm the next day.

No cause for alarm - Hipkins

Hipkins said "there is no cause for alarm" when asked about whether anyone should be concerned about heading to the rugby this afternoon.

Hipkins said all the timeframes appeared to be followed as usual.

He said "I haven't even turned my mind" about whether he would like to do both health and education in the next term.

Last night, Ardern said she would implement every aspect of Labour's election manifesto, but would not be drawn on whether she would seek a governing arrangement with the Green Party, which won 10 seats in Parliament.

"I do just want to wait until we see those final results come through and take a bit of time to take stock," she said last night.

Labour won 49.1 per cent of the party vote, enough for 64 seats in Parliament, which is the first time under MMP that a party has won a parliamentary majority.

Asked if Labour deputy leader Kelvin Davis would be deputy PM, she said he'd remain deputy leader "and that is usually the order of things".