A 'medical miracle': One year on from workplace accident 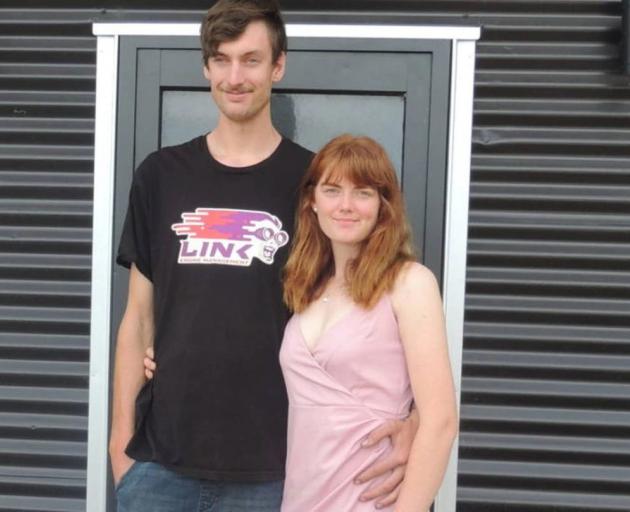 Aiden Sayer with girlfriend Amelia Henry. Photo: Wairarapa Times-Age
Masterton man Aiden Sayer was dubbed a "medical miracle" after surviving a horrific workplace accident last February that not only should have killed him but kept him from returning to everyday life.

However, one year on, he's moved on from the trauma and is living life to the full.

On February 11, 2020, Aiden Sayer was flown to Wellington Hospital in a critical condition after an 8-tonne tipper trailer deck he was welding tipped over and hit him on the face.

The impact from the hit instantly broke Sayer's nose and thrust him into a shelving unit across the workshop he was in, ripping off his entire right ear as he slid down the shelves.

Sayer's mother Vania Ireland said he had his head hit from every direction and had a 5cm deep laceration punctured into it.

He had three other hits to the head and the trauma has caused his hair not to grow back in places.

His ear was re-attached.

After 16 days in a medically induced coma, Sayer was brought out and a couple of days later started communicating with touch and eyebrow lifts.

Sayer said he doesn't remember anything from the accident and thought he was dead for an extended period.

"All I can remember was hearing a loud bang, and that's the last thing I remember," he said.

"I didn't really know what was going on. I didn't even think I was alive. I woke up in hospital thinking I wasn't existing. I thought it was all a dream.

"I was having these extremely vivid dreams and waking up thinking it was real and I was telling my mum and she was having to message my friends and ask them 'did this happen'? They would say 'nah'."

It took Sayer two weeks to snap out of that fake reality and realise he was alive after he was allowed to move to his aunt's house in Masterton on April 24, a day before the level 4 Covid-19 lockdown came into effect.

"It wasn't until two weeks of being at my aunty's place that I realised I was alive," Sayer said.

"I just couldn't come to grips with everything so I messaged all my friends and asked them to send me all their Snapchat memories so I could remember the things I used to do.

"That helped me remember and feel like I was alive."

After returning to reality, Sayer said the last thing he wanted was to remain in bed doing nothing. So he took it upon himself to get up and get on with life after initially being told it would take up to two years.

"I had a wheelchair for a little bit but I hated it," he said.

"So one day I said to my mum when she was going to get the chair for me I'm going to walk.

"Then I did it. I walked to the lounge for the first time. I was like a baby giraffe, but I still got there.

"I just wanted to get on with it. I had been laying in bed for several months, and I didn't want to stay there and miss out on so much."

He said his positive attitude has helped him defy the odds to become a fully functioning "human being" again.

"I've always been a strong-willed person, and I'm not one to sit around and not get anywhere," he said.

"You're not going to get any better by sitting around and feeling sorry for yourself.

"Having that willpower really helped me push ahead."

Asked if he still had trauma, he said "no".

"It is what it is. You can't sit and dwell on it you've got to get on with life, there's bills to pay."

One year since the accident, he has slowly pulled away from his previous welding profession and moved into the forestry industry.

He's also started running again; been cleared to drive; and is in the process of building a house.

Sayer said he was thankful to be alive and that his accident didn't burden his family further down the track.

"What I am now and what I could have been, I'm so thankful to be where I am now," he said.

"I should either be a vegetable or dead.

"My family were preparing for me to wake up a vegetable, so I'm relieved. I don't know what I would have done.

"But I'm happy. I've got everything I need. And once the house gets done, it'll be the icing on the cake.

"I'm thankful for a second chance in life."