A Milton-based helicopter company says it is devastated by the loss of a "much-loved employee and friend" in a crash near Lawrence this morning.

Lister Helicopters this afternoon confirmed one of its machines was involved in the crash, in Deep Creek, west of Dunedin. 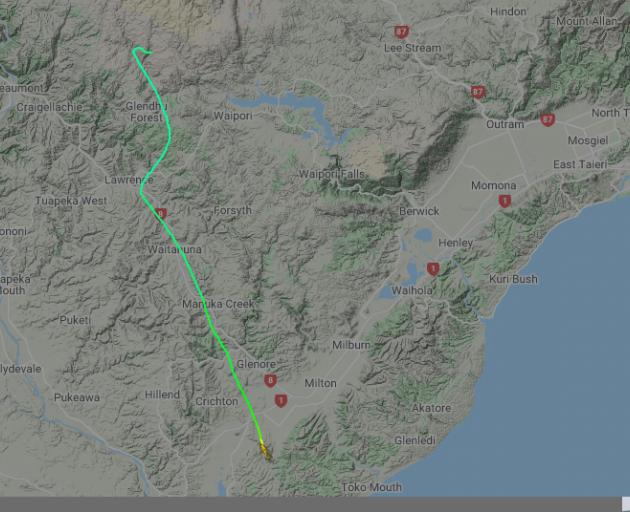 The flight path of the helicopter. Image: Supplied

The crashed chopper was located about 7.30am by a search helicopter sent from Dunedin, she said.

Lister Helicopters owner Alister Lister said the company was "devastated" by the accident.

"We have lost a much-loved employee and friend. Our thoughts are with the family at this dreadful time.

"Lister Helicopters is now working with all of the agencies involved in investigating this tragedy."

Mr Lister said no further comments would be made until these investigations were complete.

The Transport Accident Investigation Commission has launched an inquiry into the crash.

A TAIC spokesperson said it was a Eurocopter 'Squirrel' AS350 helicopter.

TAIC is appealing for any witnesses, he said.

"We are keen to hear from people who saw the accident or who saw or heard the helicopter on this early morning flight between Milton and the Lammerlaw Range – particularly if you have photographed or captured the flight on video."

The commission has appointed an investigation team of three, who anticipate getting to the accident site tomorrow morning.

The crash site is at the south end of the Lammerlaw Range and has an elevation of 800m.

The three-man investigation team would initially focus on gathering evidence that could disappear or change, such as weather effects on the wreckage.

The TAIC had issued a protection order prohibiting unauthorised access within a 200-metre radius of the main wreckage and on unauthorized handling of any other wreckage or evidence.

The team would be investigating the background of the helicopter pilot and of operational staff.

It would be considering the history, performance and maintenance of the helicopter itself.

The operating environment was also of interest.

Its website says the business operates four helicopters from its South Otago base, and provides agricultural, commercial and scenic flight services.