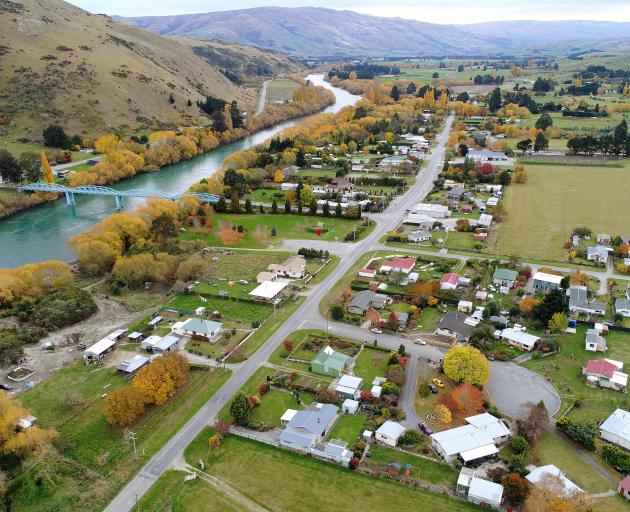 The Central Otago town of Millers Flat. PHOTO: STEPHEN JAQUIERY
Two high-voltage electricity lines which came into contact at Millers Flat last month had the potential to kill a group of about 10 contractors working at the site.

That is the view of several current and former electricity industry figures spoken to by the Otago Daily Times yesterday.

The incident, at the northern end of Millers Flat, occurred on August 20 when a contractor for Aurora Energy, line maintenance company Connectics, was working on Aurora’s deactivated 11kV line.

It is understood the line came into contact with the live 33kV line owned by Talla Burn, a small generation company supplying customers between Raes Junction and Clyde.

Talla Burn director Jeffrey Wilson said the electricity from the 33kV line earthed through the bucket truck being used.

Connectics confirmed the incident occurred, that no-one was harmed and it was co-operating with an investigation.

Mr Wilson had a photograph of black burn marks left on the gravel by the electricity passing through the truck’s tyres.

After being alerted automatically to a fault on his network, he drove to the scene and was there within about 20 minutes, Mr Wilson said.

He found about 10 people "standing around looking sheepish", but unharmed.

A spokeswoman said providing information at this stage would amount to "pure speculation" and as an investigation was under way it would be "completely inappropriate".

She referred to "false claims" put forward by three individuals, "none of whom work for or with Aurora Energy".

The spokeswoman declined to say who would conduct the investigation.

"We will work closely with our service provider to ensure the circumstances of the incident are understood and any actions arising from the investigation are implemented."

Mr Wilson said except in an emergency, he expected Aurora to give him 15 working days’ notice when it wanted his system shut down, but on this occasion he was not notified.

Mr Wilson said his line was not on the same pole as the Aurora one, but the Aurora line crossed beneath his line at right angles.

After Aurora replaced one of its wooden poles with a taller metal pole, the two lines ended up being closer together, he said.

"So when you lift the [Aurora] wires 1200mm underneath somebody else [Talla Burn], you can sometimes get a bit close.

"You may in fact get very close. In fact, they welded their wires to my wire."

Mr Wilson said in his phone conversations with Aurora’s Cromwell control centre operator during the incident it became clear to him Aurora did not know the contractors were working at Millers Flat.

"I said: is anybody working down there, and he said ‘no’."

Mr Wilson said it was the job of control centres to give contractors clearance to work on lines.

The situation could have been worse, Mr Wilson said, if he had accepted no-one was working near his lines and they were "livened up again" after the incident.

Asked what would have happened to anyone touching the bucket truck, Mr Wilson said: "People die at 230 volts, so I’m sure they would die at 33,000 volts."

He did not know why the lines workers were not harmed.

A WorkSafe spokeswoman said "the business" was required to identify any relevant health and safety issues and "determine what actions need to be taken to prevent similar incidents occurring in the future".

It must then provide WorkSafe with a report for review.

On December 9, 2010, Delta Utility Services lineman Roger Steel, of Alexandra, died from electric shock and severe injuries when a power pole at Millers Flat he was attached to toppled over.

Delta was fined $75,000 in the Alexandra District Court.