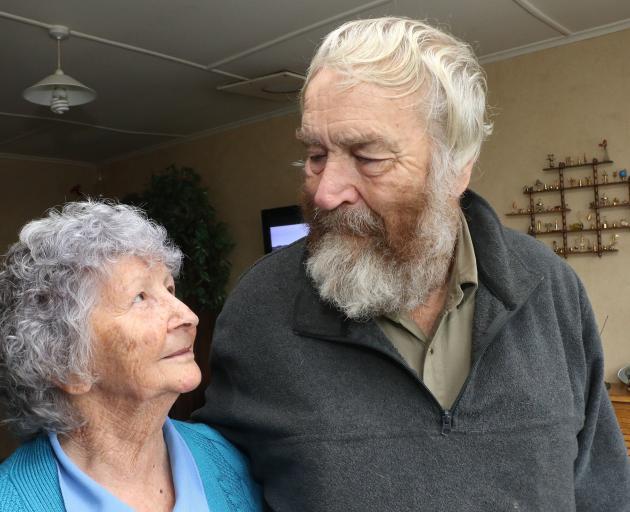 Balclutha residents Beverly and Bruce Keith. PHOTO: JOHN COSGROVE
A Balclutha man was left frozen and in severe pain waiting for an ambulance which never came.

It is the latest southern ambulance delay story to emerge as the wait continues to learn whether the $83million over four years for road ambulance services announced in this year’s Budget will help alleviate the situation.

Questioned about the situation, Minister of Health Andrew Little acknowledged St John did not always meet its targets.

He pointed to the additional funding provided to ambulance services, but did not respond to a question asking if it was sustainable for St John to continue operating with its current resources.

St John coastal Otago territory manager Doug Third said he could not yet confirm what the extra funding would mean for the organisation, but he would be able to comment further on the matter at the end of the month.

Meanwhile, Bruce Keith said he continued to think about the day he waited anxiously for an ambulance after suffering a seizure at his Balclutha home in February.

His body had essentially "frozen" and he became stuck in the doorway of his shed.

His wife, Beverly, called for an ambulance and further follow-up calls were made by other family members at their house at the time.

After nearly an hour and the situation becoming desperate, the Keiths were still not given a time as to when an ambulance might arrive.

Mr Third said the Balclutha ambulance had been committed to a higher priority incident, and when Mr Keith’s case was upgraded in priority, there was no ambulance available.

It was a painful wait for Mr Keith, who said he did not know how he was going to survive when his younger brother came to tell him an ambulance was still not coming.

"I was frozen and I was thinking, ‘I don’t know how long I can stand here before maybe passing out’," Mr Keith said.

"The pain was enormous."

He thought about that moment "almost daily" and the memory was "awful", he said.

The practice sent a nurse with a wheelchair. They wheeled Mr Keith down the main street of Balclutha to the hospital.

"It was really quite horrible seeing them try to get him into the wheelchair — they just said ‘this is going to hurt’," Mrs Keith said.

"It was a pretty horrific time."

Mrs Keith’s frustration at the situation escalated this week when she overheard a conversation in a hospital where a paramedic was telling an elderly person that if an ambulance could not make it, the fire brigade could attend.

However, Mrs Keith said she had specifically asked the call-taker for the fire brigade when the ambulance for her husband was delayed, but was told that could not happen.

However, Mr Keith’s incident "did not meet the criteria for Fenz co-response", he said.

Mr Third confirmed St John received a call from the Keiths’ address at 4.32pm that day.

"The caller was advised by the call handler that it did not appear that the patient was in immediate danger and was advised that an ambulance had not been dispatched at that stage and a nurse or paramedic would contact them within 10 to 30 minutes after reviewing the case.

"The Balclutha ambulance was committed to a higher priority incident outside the township."

Mr Keith’s incident was upgraded in priority at 5.01pm, but no ambulance was available to respond at that time, he said.

About 45 minutes later, St John was advised by the caller that the ambulance was no longer needed and that Mr Keith had been taken to a local medical centre by private transport.

Mr Third said St John would be "bolstering" its resources with a rapid response vehicle, crewed by an intensive care paramedic who would respond to immediately life-threatening calls.

He also pointed to the additional funding in the Budget for the organisation, but could not yet say how that would be used.

"We are now in the process of establishing what this means for St John, working with the Ministry of Health and ACC."

St John would be able to make further comment on the extra funding following a discussion with its board at the end of the month, Mr Third said.