'Now you've got a boy's cut': Refund offered after locks lopped off

It took just moments for all the hair to be chopped off. Photo: Supplied
Jacob Lister grew his long, luscious locks over two years and they attracted praise and admiration.

His hair was a big part of his personality and all he wanted was to give it a bit of love and have it styled.

But in a matter of moments, his mane was gone, chopped off by a hairdresser who said it made him "look like a girl".

The 23-year-old went to a branch of the Just Cuts chain at Palmerston North's Plaza shopping centre last Friday with his girlfriend, planning to get a style similar to hers.

He said he gave clear instructions but when he was sitting in the chair, Lister was then subjected to what he described as "sexist and borderline homophobic comments".

"When I suggested the style my girlfriend had she was not interested in hearing it and said 'you don't wanna look like a girl'," Lister told the Herald.

"She's got ideas about how different genders are supposed to present."

Lister said he took the comments as "Boomer attempts at banter" as the hairdresser started to do the trim. 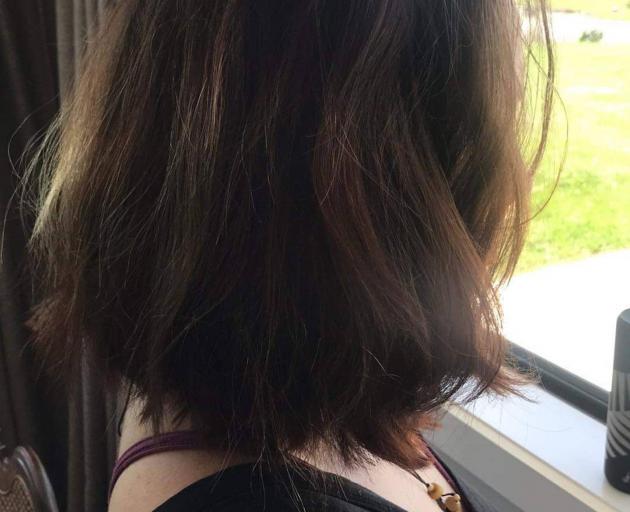 Jacob's girlfriend's hair, which he wanted to base his style on. Photo: Supplied
Lister said his girlfriend was concerned about what she could see happening to him, but her view was partly obscured by the hairdresser.

When the hairdresser reached the sides and back of the hair, Lister said the unkindest cuts happened quickly.

"When she got to the sides she took a single handful of each side and cut the entire length of my hair," Lister said.

"With the other side she deliberately cut it in a way to gloat at how much she was taking off. She didn't want to style my hair, she just wanted to cut it all off for her own fun.

"It was so fast there was nothing I could have done to stop it."

Lister told the Herald that he was dumbstruck by the sudden removal of his locks, shocked that the hair he had grown in over two years was gone.

Lister said the hairdresser appeared to know that she had done wrong, despite his shocked silence.

"She started saying 'oh your girlfriend's going to be mad, it's too short now eh?'," he said.

As he left, the hairdresser told him: "Now you've got a boy's cut".

Lister said he did not want to make a scene and paid and left the store.

"As soon as I got to the car I started crying"

A staff member spoken to by the Herald said that Lister was visibly upset.

Lister told the Herald that he believed his wishes would not have been ignored if he was a woman.

He noted that he had previously had his long hair styled at a different hairdresser who had charged him a "man price" despite the cut taking just as long as a female customer, adding that the gendered price structure "just doesn't make sense".

On Sunday, the Herald spoke to the hairdresser responsible for the cut, who denied that she had done anything wrong and claimed that other staff would back her up.

On Monday her boss told a different story, apologising to Lister and offering him a refund.

The salon's owner, Jayde, told the Herald that customers could have full confidence that their wishes would be respected.

She said that the woman who cut Jacob's hair was an experienced hairdresser and she would be discussing the incident with her.

"We have to go through a process," she told the Herald.