0 Comments
New Zealand First leader Winston Peters says his party is committed to keeping Southland's Tiwai Point smelter open if his party is voted in at this year's election.

Mr Peters, who is also Deputy Prime Minister, made the comments at the Invercargill Working Men’s Club in  Southland this afternoon.

He said New Zealand First would ensure a 20-year electricity transmission cost agreement for Tiwai Point Aluminium Smelter if it is voted in on September 19.

"A government buyout is not what I’m suggesting.”

A few hundred people attended the meeting including Southlanders concerned about next year’s closure of the Rio Tinto owned smelter near Invercargill.

The smelter directly employs about 1000 people, and a further 1200 people’s livelihoods are partly or totally dependent on supplying the enterprise. Many of those are highly-paid, specialist engineering roles. 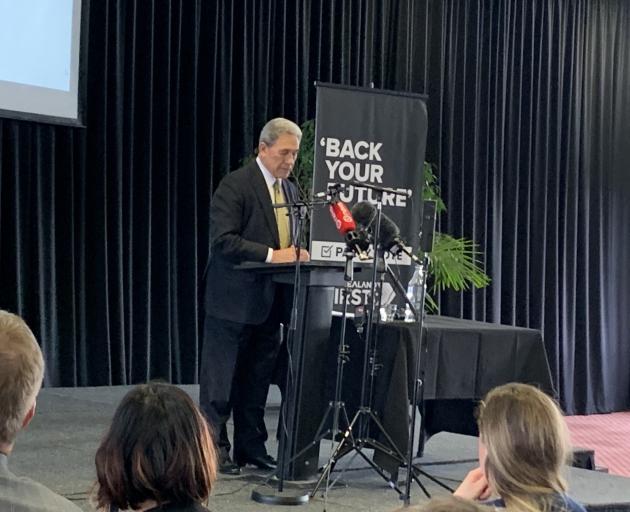 Winston Peters spoke at the Working Men's Club in Invercargill this afternoon. Photo: Abbey Palmer
Mr Peters said he wanted to give the smelter a “fair go” and then “things would look after themselves.”

Yesterday, a spokeswoman told the Otago Daily Times the Government was still working on what a package of support would look like.

It has been reported that the Government would not be allocating any specific amount of money to the region before the September 19 election, because consensus would not be reached between Labour and New Zealand First.

NZ First MP Mark Patterson said for 50 years Southland had been “turning water into money” through the smelter.

“For nine years the leader of NZ First had been advocating to ensure the smelter's future. If the smelter closes, this town will be decimated.”

Mr Peters thanked everyone for attending.

“We’re here, in the heart of Southland... to join the fight to save thousands of jobs in your region... we’re not here because its election year.

“If we don’t win and restore honesty and common sense to this issue, we’ll have disastrous affects here and right across NZ... The wrong decision or failure to do something here while result in job losses everywhere.”

Mr Peters said it was the most successful aluminium plant in the world.

“What we do down here in Tiwai maters.”