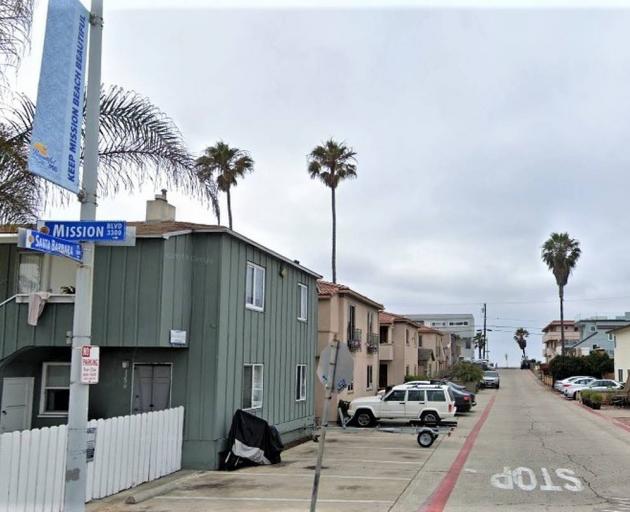 Hadleigh Keane was found on New Year's Day near this San Diego intersection, according to local police. Photo: Google
A New Zealander in California beaten as he was evicted from a New Year's Eve party later died from head injuries.

Hadleigh Keane, 34, was ejected from a party and found in trouble the next morning.

"He was being escorted from the party, becoming violent with the people who were escorting him," Lieutenant Andra Brown said.

Brown said Keane was accused of inappropriately touching some females at the party.

It's believed Keane was punched.

"He was left at the scene. The people that were escorting him away and struck him went away back towards the party and left in a different direction."

Then somebody called a medic.

"Mr Keane was treated and released at the scene at his request," Brown said.

But the next morning, at about 10am on New Year's Day, he was seen near Mission Boulevard and Santa Barbara Place.

"Someone found him and thought he had overdosed," Brown added.

"The officers that arrived immediately recognised he had some sort of a head trauma."

He was taken to hospital.

"His head trauma was not survivable and that's when the homicide unit got involved," Brown added.

Keane died as a result of his injuries on January 8. His name was released nearly a week later, on Thursday, New Zealand time.

"The investigation has been pretty much completed and it will be referred to the District Attorney's office for evaluation," Brown said.

Police in San Diego have been in contact with Keane's family.

The Ministry of Foreign Affairs and Trade said it was providing consular assistance to Keane's family.

At the time of his death, Keane was visiting San Diego for work.