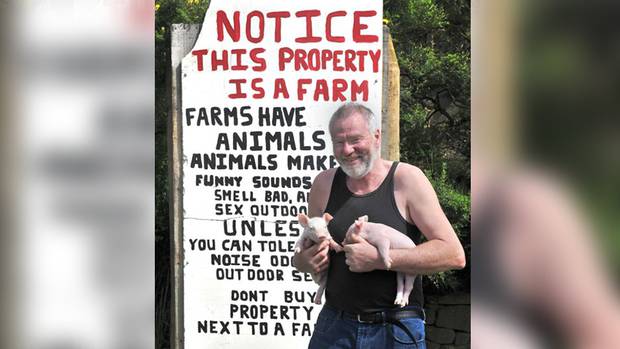 Pig farmer Pieter Bloem with the "educational" sign outside his Otago Peninsula property. Photo: Otago Daily Times
An Otago pig farmer has found a unique way to warn people wanting to buy a house in his rural neighbourhood that they may come across "outdoor sex" and "bad smells".

In 2019 Dunedin farmer Pieter Bloem, who lives on the Otago Peninsula, had received more than 65 complaints about his property in the last decade.

So when he noticed a house across the road was up for sale, he was concerned whoever purchased it would complain about the smells.

He decided to erect a sign warning potential buyers of what they may come across after moving in - outdoor sex, strange noises and bad smells. 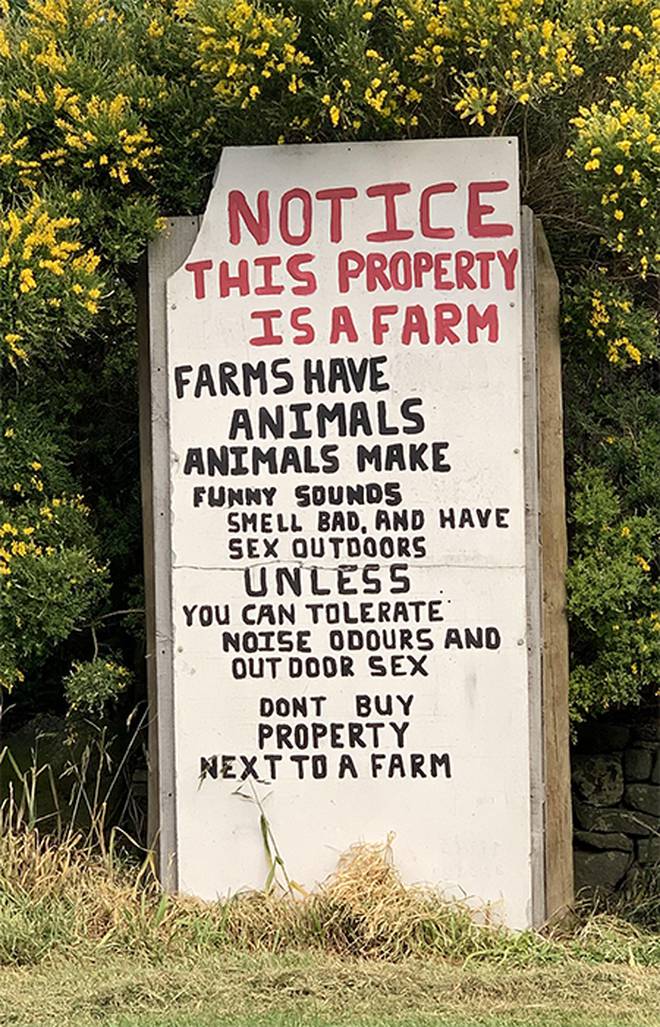 The sign outside Pieter Bloem's farm. Photo: Otago Daily Times
More than a year later, his sign is still up and has since gone viral on social media.

The sign reads: "Notice. This property is a farm. Farms have animals. Animals make funny sounds, smell bad, and have sex outdoors. Unless you can tolerate noise, odours and outdoor sex, don't buy a property next to a farm."

A photo of the sign has since made it to Reddit, with a number of locals sharing stories about the smell.

One person claimed they were set to buy the property across the road, but said the smell was horrific.

"My business partner and I went to buy that property across the road. The stench was INCREDIBLE. Absolutely no one could live downwind of that place, which hugely affected the land value ... and the pig screaming was, uh, quite f***ing disturbing," they wrote.

Another chimed in, saying there are worse things in life to be worried about.

"[Noise, odours and outdoor sex]. I've been going to music festivals for years, sounds fine to me."

In 2019 Bloem told the Otago Daily Times his family runs 3000 pigs over two sites and wanted a quirky way to alert potential home buyers in a bid to stop complaints wafting in.

- Additional reporting by the ODT