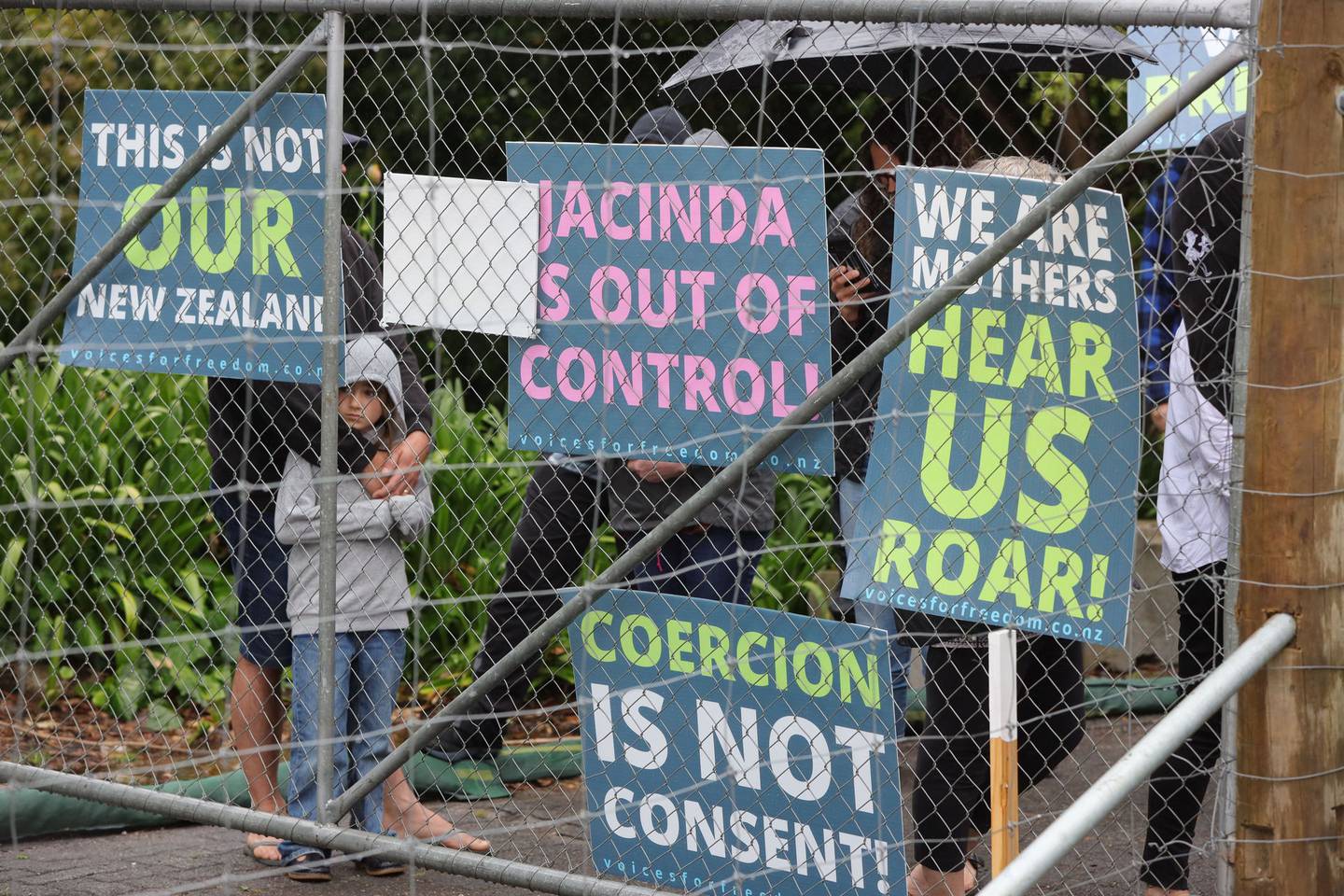 Ardern is in the region to see vaccine efforts first-hand and to meet local businesses.

A small group of what appeared to be vaccine mandate protesters gathered ahead of one of Ardern's planned visits.

They were yelling various chants, saying the Government has "gone too far".

The group of about 60 protesters drowned out Ardern's welcome at an outoor sod-turning event.

The Prime Minister arrived at the sod-turning through a back entrance, avoiding protesters who were also yelling "liar, liar pants on fire" to Ardern.

Ardern later spoke, acknowledging her "groupies" who had been following her, and said their singing was good but their lyrics needed a bit of work.

Her visit comes a day after confirmation the country will officially move into the new traffic light system on Friday and will effectively see more restrictions eased back, despite still being somewhat strict.

Earlier today Health Minister Andrew Little said some regions moving into the red light setting had lower vaccination numbers and were places where they expected people to travel to in numbers during the summer.

Restrictions therefore needed to be in place to stop overcrowding, he told The AM Show.

Little said the vaccination numbers in Tairāwhiti  - the Gisborne region - needed to improve, especially for Māori.

"There's a lot of concern in the community at the moment about Rhythm and Vines, anyway, because people are terrified of a whole horde of people - a lot of them from Auckland - coming down and crowding out a reasonably confined space."

The health system was coping at the moment and would continue to cope, he said.

Even moving to the orange traffic light, only vaccinated people would be able to attend the event.

Little said the organisers knew the conditions and it was their call whether to cancel it.

On ordinary members of the public starting to gather again, Little said if you were hosting a get-together and you trusted that the people were vaccinated, then that would be enough.

"If these are people you know - family members, close friends - you trust them when they tell you they've been vaccinated, you accept that then that's going to be acceptable."

Anyone else, you should be scanning their vaccine pass.

If there was an outbreak and it was traced back to your party then questions would be asked and there could be an infringement if you've breached that rule.

He said it "feels a bit weird", but it was about ensuring everybody was safe from infection, he said.

When asked if people could hug at a bar on Friday when Auckland moved to the red traffic light, Little said people should use their judgement and if it was someone you had nor seen for a long time then it might be worth still keeping your distance and doing a "virtual hug".

"There are ways of showing affection to people who you like and haven't seen for a while that doesn't involve close contact."

"This thing is still around and there will be some people who will not want to be hugged, they just want to take care of themselves too and they just don't know where people have been."

Sharing a taxi with other people was okay if you were wearing masks and spaced.

Little said they needed to know more about the new Covid strain, Omicron, and the level of severity of illness it caused.