A veteran Queenstown paragliding pilot has been fined for a reckless landing that injured his four-year-old daughter.

When Daniel Wade Stephens (46) took off from Coronet Peak on a tandem flight with his daughter on February 12 this year, he was supposed to land in the designated landing zone at FlightPark Queenstown at the foot of the mountain.

However, he decided to land in a fenced-off area in front of the facility’s cafe because, in his words, he ‘‘thought it would be a fun thing to do’’.

Stephens misjudged the landing and he and his daughter hit a wooden fence, smashing a rail.

His daughter suffered a large bruise on her forehead, a chipped tooth and split lip, and showed symptoms of concussion.

After he voluntarily notified the Civil Aviation Authority (CAA) of the incident, an inspection of his equipment showed he did not have warrants of fitness for his canopy nor his pilot or passenger harnesses.

Stephens subsequently admitted two charges of breaching the Civil Aviation Act: operating a paraglider in a manner causing unnecessary danger to a person, and operating an aircraft without a current warrant of fitness.

He had cooperated with the CAA and made an early guilty plea.

Judge Chris Sygrove said the defendant’s offending was aggravated by his premeditation, and the risk to his passenger and the cafe’s patrons.

His lack of warrants of fitness suggested a ‘‘cavalier attitude’’.

He also did not have a current tandem paragliding rating, and was not a member of a bona fide paragliding organisation.

‘‘No doubt you’ve had your own demons to deal with from the fact your four-year-old daughter was injured.’’

He convicted Stephens and fined him $2000 for the unnecessary endangerment charge, and $1350 for operating without a warrant of fitness.

Stephens has been paragliding in the resort for at least 13 years, including as a commercial tandem pilot.

'A sense of entitlement': Conviction for jet-boating lockdown breach 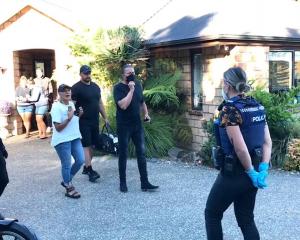 Covid-19: 16 new cases, including one on West Coast