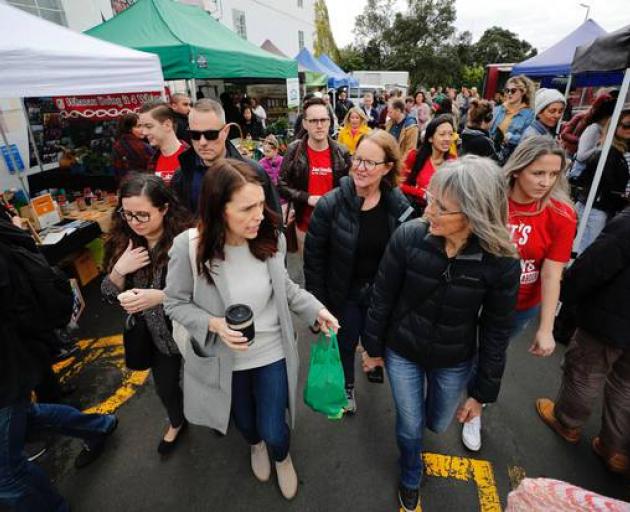 Jacinda Ardern was out campaigning at a farmers' market in her Mt Albert electorate this morning. Photo: NZ Herald
Prime Minister Jacinda Ardern has ruled out a deal with NZ First in the critical Northland seat after a new poll that shows NZ First's Shane Jones coming a distant third.

"We have said we wouldn't [do a deal] - and NZ First hasn't asked," Ardern said on Sunday, as she campaigned at the Grey Lynn farmers' market in her Mt Albert electorate in Auckland.

Ardern reiterated that the no-deal stance also applied to the battle in Auckland Central, where the Greens' Chloe Swarbrick is up against Labour's Helen White, and a National candidate yet to be announced.

A Greens win would ensure they returned to Parliament, without having to rely on the 5% party-vote threshold.

"We haven't done deals in the past. I don't see any reason to change that. Winston Peters himself has always been clear himself in not doing deals."

Jones has huge ground to make up if he wants to win the Northland seat and give his party a path back to Parliament without winning 5% of the party vote.

A 1 News Colmar Brunton poll has Jones on just 15% support, with National's Matt King, the incumbent, on 46% and Labour candidate Willow Jean-Prime on 31%.

Jones did not front on TVNZ's current affairs programme Q+A  on Sunday morning, but admits he needed to get the "political jack-hammer" out. There was a huge road ahead.

King was happy with the result but cautious: "It's only a poll of 500 people. You're a fool if you rest on your laurels."

The poll, released this morning on Q+A, had responses from 503 eligible Northland voters between July 29 and August 4. Eleven percent of those polled didn't want to say how they would vote or didn't know.

The party has been languishing at about 2% in recent polls, but NZ First has usually done better on election night than in the polls.

Sunday's poll is the first to measure whether Jones has any chance of winning the seat at the general election on September 19.

She said she had not given consideration to a national mask day to prepare people if Covid-19 returned. She was keen that Kiwis had masks as part of their civil defence preparedness packs.

New Zealand was the only country that she was aware of - in the current circumstances -that had not seen a resurgence. It would be irresponsible for New Zealand not to prepare for that.

Ardern will attend Cabinet on Monday and then begin her regional campaign on Tuesday.