Picture this - Prime Minister Jacinda Ardern is chasing daughter Neve around on her pet lamb, trying to get her to sit down for the fishy Christmas dinner that her dad Clarke Gayford has caught and cooked.

It is a scene Dunedin's Broad Bay School pupil Mila Schouten Richardson (12) depicted in her latest artwork, which has been selected by the prime minister to be displayed on her annual Christmas card.

Ms Ardern chose four Christmas images from 2800 entries for her card this year, plus Mila’s, which will feature on the back cover of all the cards.

Ms Ardern said given the number of cards received this year, picking four was very difficult.

But choosing Mila’s was not.

"Usually on the back of my Christmas cards, I put a family photo. 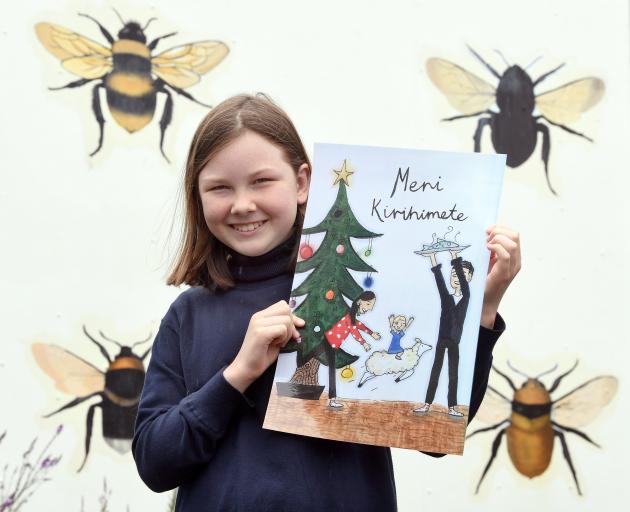 Mila Schouten Richardson with her drawing of Prime Minister Jacinda Ardern’s family, which will appear on the back of the prime minister’s annual Christmas card this year. The bee mural behind Mila, at Broad Bay School, was painted by her father, artist Simon Richardson. PHOTO: STEPHEN JAQUIERY
"I don’t have a particularly good updated family photo of me, Clarke and Neve.

"So this year, courtesy of Mila, who is 12, we’re going to be using [her portrait] on the back of all of our Christmas cards.

"Thank you Mila for my updated family portrait."

Mila said she was delighted the prime minister had singled out her portrait.

It was quite a surprise, she said.

"They didn’t send me an email, so I didn’t really know I had been selected.

"Dad was scrolling through his Instagram and watched [Ms Ardern’s announcement] to see who won it, not thinking that we had gotten it.

"We watched it and then Mum and Dad screamed and Mum started crying."

It is not the first time Mila’s art has been recognised.

She was shortlisted for J.K. Rowling’s Ickabog illustration competition earlier this year, in which tens of thousands of young artists around the world entered artworks to illustrate Rowling’s fairy tale The Ickabog.

Mila is the daughter of award-winning Dunedin artist Simon Richardson, and no doubt she is a chip off his block.

But when asked where she thought she got her talent for art from, she simply answered, "Myself".

"Not my dad. He does different art."

Ms Ardern said the Christmas card entries would be exhibited at Parliament over the next few weeks.