Quake warning system could save lives

New World Kaikōura after the magnitude 7.8 quake in November 2016. Photo: RNZ / Rebekah Parsons-King
There's good reason why New Zealand's known as the shaky isles - we're prone to earthquakes. We don't know when the next big one will hit, so is now the time to invest in an earthquake early warning system?

Unlike other quake-prone countries and regions around the world, New Zealand doesn't have an earthquake early warning system.

Japan, Taiwan, California and Mexico City all have them, and while each system works differently, they give people precious seconds of warning before incoming shaking.

That's enough time for organisations to shut down dangerous equipment, for example, or slow down high-speed trains, or put hospital surgeries on hold.

The general public might have enough time to protect themselves - in New Zealand the advice is to drop, cover, hold - and that has the potential to minimise injuries and save lives.

It's not a matter of if, but when, the next big earthquake hits here. There's a 75 percent likelihood of an earthquake on the Alpine Fault in the next 50 years.

Wellington-based seismologist Caroline Holden is leading a team of researchers looking at how an earthquake early warning system could work in New Zealand.

She says it's important to remember that early warning systems don't predict earthquakes. 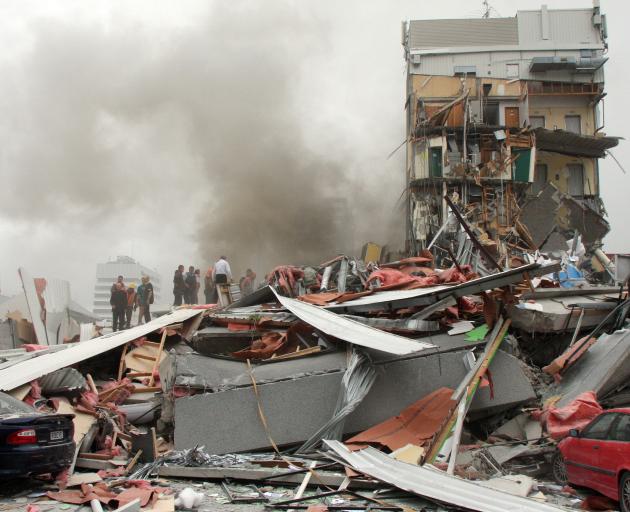 Police and volunteers work to rescue people trapped in the collapsed CTV building. Photo: Star News
Sensors detect when an earthquake starts, which then triggers the alert system.

Depending on where you set the shaking threshold, an alert would be sent to people likely to feel it.

If you're close to where the shaking would be most strongly felt, you might get five or 10 seconds warning. Further away, where you might feel lighter shaking, you could get 30 seconds, or even a minute.

It's not a lot of time, so Massey University social psychologist Lauren Vinnell says it's crucial people know what to do if they get an alert.

"If people already know what they should be doing to protect themselves in an earthquake, whether there's a warning or not, and if they've practiced that behaviour, then that's going to save them time when they're processing that alert."

Vinnell says there is an appetite for an earthquake early warning system, with research undertaken in 2019 showing 97 percent of people surveyed thought it would be useful or somewhat useful.

The public would also need to understand that an early warning system wouldn't be accurate all of the time - there could be false alarms, or it could even miss earthquakes.

Vinnell says explaining those when they do happen will be crucial to maintaining people's trust in the system.

Until now, Holden says, cost has been the biggest barrier to New Zealand getting an earthquake early warning system up and running.

But the stars are starting to align: sensor technology is becoming increasingly affordable and reliable, and authorities here have also had the benefit of watching what other countries have done.

But it'll ultimately be up to the government and the relevant agencies to make the call on whether that investment is worth it.

Find out how to listen and subscribe to The Detail here.

-By Sarah Robson, producer of The Detail