Stock photo: Getty
Schools reopen for the third term today and principals are worried staff shortages and winter illnesses will be every bit as bad as last term.

They warned RNZ that some teachers and students had been at breaking point before the two-week July holiday and would need some respite in the coming months.

They also said new instructions "strongly recommending" face masks would not be as effective as a full mask mandate from the government.

Top of the South Secondary Principals Association chair Richard Dykes, tumuaki of Nelson College, said staffing and ongoing disruption to learning would be the biggest challenges as schools reopened.

"That disruption is becoming cumulative and what I'm hearing from schools from my region but also further afield around South Island and New Zealand is the fear that we've got students who are already saying 'look, given the amount of disruption - this is probably our most at-risk students - that's it, I'm signing out'," he said.

Dykes said in term 2, schools had been averaging about 20 percent of staff absent on any given day and teachers had been having to give up free periods to cover classes.

"I think principals are really worried that we just got through to the end of term pretty much at breaking point," he said.

"If we pick up from there and carry on at that same rate there's a real concern among principals that the impact on our staff is going to be significant."

He said the government needed to announce as soon as possible what measures it would take to help students pass NCEA this year and relieve the pressure on teens and teachers.

Dykes said the government also needed to dial back wide-ranging changes to the school system - such as its overhaul of the NCEA qualification.

"Even a low level of staff absenteeism, let's say there were eight or 10 teachers away, which in a school my size is a relatively business-as-usual sort of day, I don't have any relievers any more to cover them so I've got to start rostering home.

He said the government needed to make it a lot easier to hire teachers from overseas.

Principal of Beach Haven Primary School in Auckland Stephanie Thompson said she was worried there would be no let up in the illnesses that were so disruptive last term.

"Between the influenza and Covid that really struck our staffing community term 3 is not looking any rosier and of course the more staff you have out sick the harder it is to keep things motoring at school because the relievers are like unicorns," she said.

Thompson said staffing would be even tougher for primary schools this term because they would need teachers to cover mid-year growth in enrolments and that would leave even fewer available to work as relievers.

The Ministry of Education has started providing masks for staff and students and last week wrote to principals saying it strongly recommended they require masks indoors for the first four weeks of the third term. Previously mask use was only strongly encouraged.

Principal of St Patrick's School in Invercargill Callan Goodall said the government's position on masks was not helpful for schools.

"We're the meat in the sandwich where we're the ones having to tell our communities, yes you all need to wear masks or no you don't and there isn't consistency across the country on that.

Goodall said like schools everywhere, those in Invercargill were finding it nearly impossible to find relief teachers.

"We're in the position now where relievers are almost impossible to find," he said. 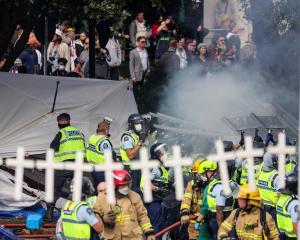