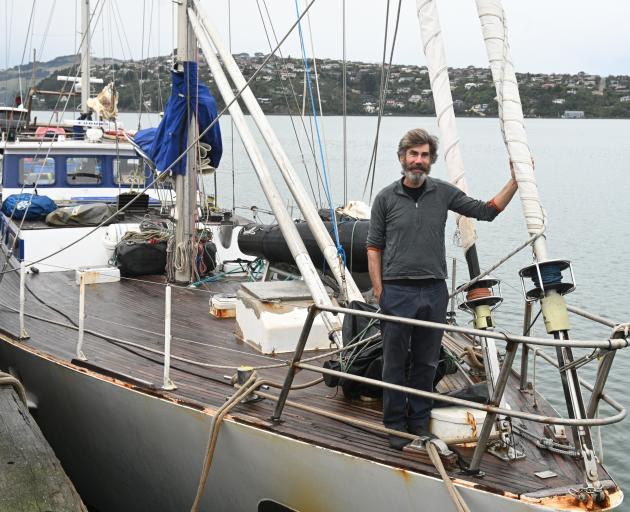 Captain Steve Kafka, of Dunedin, has returned to Dunedin after a seven-month voyage amid the Covid-19 pandemic. PHOTO: LINDA ROBERTSON
Listening to radio reports of a global pandemic while in the middle of the ocean was a surreal feeling for Steve Kafka.

The Dunedin boat captain arrived back in the city on Friday after a seven-month expedition that isolated him from the outbreak of Covid-19.

Mr Kafka captained research sailing vessel Evohe, which berthed at her home port Dunedin for the first time since November 27.

What started off as a conservation trip to Gough Island in the South Atlantic became a journey of unknowns, as the virus took hold.

Mr Kafka said he was "delighted" to be home after the 228-day journey.

"It’s always good to be back in Dunedin."

Covid-19 had been "surreal" as crew listened over the radio to developments and especially to details of New Zealand’s journey with the pandemic.

"We haven’t encountered it at all; it was quite hard to believe for a start."

Mr Kafka said the ship was originally contracted to support the ambitious Gough Island restoration project, which was working to save critically endangered albatrosses from extinction by eradicating mice from the island.

The project was cancelled in mid-March due to increasing travel restrictions, and Evohe was retasked to pick up 12 conservation biologists on the island and take them to South Africa.

Rapid border closures in Cape Town and beyond meant crew and passengers on board had to re-evaluate and sail 13 days to Ascension Island, Mr Kafka said.

At times fresh fruit and vegetables were hard to come by as Covid-19 disrupted supply chains around the world.

Mr Kafka said the first thing he had done on dry land was buy groceries.

"We all appreciate the supermarket."

Evohe’s next trip is to the Auckland Islands in two weeks, to study Southern right whales.