A $2000 reward is on offer following the discovery of eight puppies with their throats cut at an Invercargill park.

Otatara resident Kim Durry and her husband had walked their dogs near Sandy Point three to four times a week for as long as she could remember.

On Friday afternoon, they spotted something they just ‘‘couldn’t stomach’’.

"Then I saw the others lying there all with their throats cut.’’

Animal advocacy group Paw Justice had since offered a $2000 reward for anyone who could provide information about the slaughtering.

Dumped in a wide-open clearing, Mrs Durry said she was terrified someone, especially a child, would come across them.

‘‘I wouldn’t want my kids seeing that, we are teaching children to be kind and then they see people are capable of doing that.

‘‘My husband works at the meat works, he’s used to blood and guts - but even he couldn’t stomach it.’’

The pair knew they had to do something, but had no materials to relocate them.

‘‘I picked one up to move it and its head fell off, it was just hanging by a thread.’’ 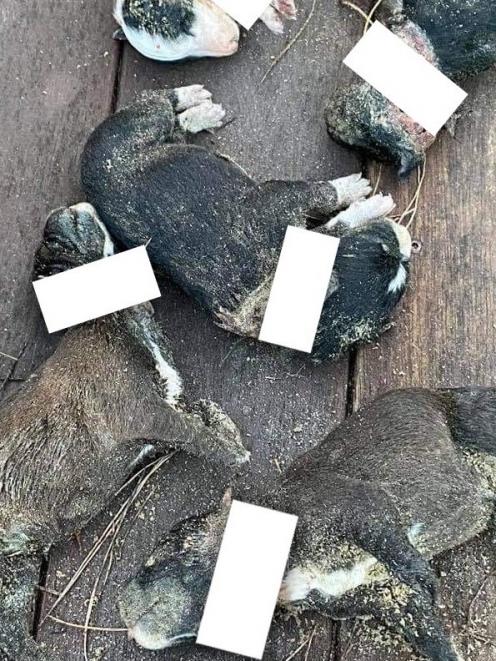 The puppies were dumped in a wide-open clearing. Photo: Paw Justice
After covering them up with branches and pine needles, she sent a message to Southland volunteer-run rescue organisation Furever Homes.

In less than an hour, a volunteer came to retrieve the animals.

‘‘It was totally avoidable, I couldn’t comprehend how someone could do that.’’

There were plenty of people, including Furever Homes, who would’ve taken them in with ‘‘no judgement’’.

While she did not believe jail was the solution, people needed to be educated about the level of responsibility which comes with caring for an animal.

‘‘People need to be banned from owning animals if they can do that.’’

A post on the Paw Justice social media page yesterday said violence against animals should not be tolerated.

‘‘Established research shows that this type of cruelty against animals is linked to an increased risk of violent offending against human beings, including domestic violence, sexual assault and homicidal tendencies.’’

A police spokeswoman confirmed that police had received a report of the incident last night and more information would be made available in time.