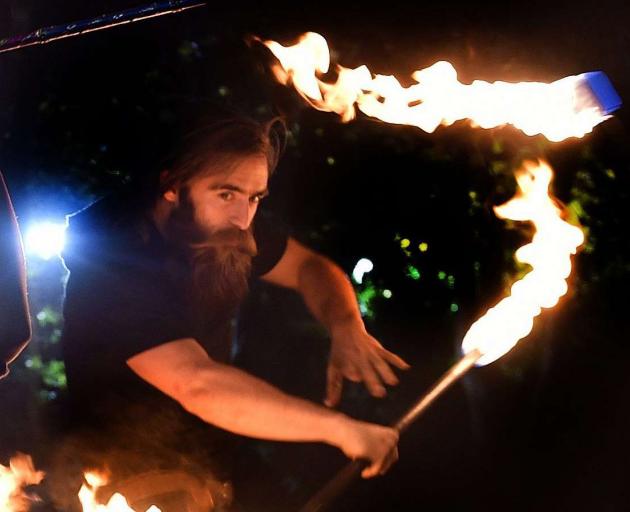 Josh Smith, also known as Josh Smythe, previously led the Dunedin Fire and Circus Club which according to a survey of members had a problematic culture. Photo: ODT files
The former student representative for clubs at the University of Otago has revealed a complaint about sexual misconduct has been laid against him.

Josh Smith, also known as Josh Smythe, led the Dunedin Fire and Circus Club and was the Otago University Students' Association (OUSA) representative for clubs and societies but stood aside from those positions in recent weeks.

Mr Smith made a lengthy statement on social media earlier this week about his reasons for standing down from those roles, but that statement did not contain any reference to alleged sexual misconduct.

He released a statement today on those allegations. In an interview with the Otago Daily Times he said the complaint came as a shock and he had only just been told of it. "This has completely broken my heart."

He understood a complaint had been made to student magazine Critic Te Arohi, but he was unaware of any allegation being made to police.

He had not been arrested. Mr Smith said he had problems with alcohol in the past, but had no memory of being a perpetrator of sexual misconduct.

His statement said he was made aware of the complaint against him late yesterday afternoon.

"This absolutely wrecks me."

Though not admitting guilt, Mr Smith said he had betrayed people's trust.

He had also been a victim of abuse. "I do not remember any of these instances. I have struggled with alcohol for most of my life . . . and was a pretty full-on blacked out alcoholic from 14-19 years of age.

"However, this is no excuse for my actions."

The complaint against Mr Smith followed a survey carried out at the Dunedin Fire and Circus Club that revealed a problematic culture at the club in relation to predatory behaviour.

A review recommended a change of leadership and Mr Smith stood down as president at the start of this month.

"As the president, it was my fault that the channels for reporting this behaviour had not existed beforehand, and for creating spaces that were not safe," he said in his social media statement made before the complaint about his own conduct surfaced.

In today's statement he said: "Never in my right mind would I ever bring this type of pain into anyone's life and it breaks my heart a thousand times over that I have done so.

"From this point on I am going to exclude all substances from my life and withdraw from pretty much all social and cultural activities.

"I apologise profusely to those I have harmed, and those whose trust I have broken.

"I guess this is goodbye, for a long while."