0 Comments
A Dunedin father of three beaten to death with a cricket bat was "a funny, intelligent, loyal soul", his family says.

Lia Bezett fought back tears as she spoke outside the High Court at Dunedin after John Kenneth Collins (39) was found guilty of murdering her brother, 45-year-old Brent Andrew Bacon.

The court heard the conviction represented the killer’s second strike under the three-strikes regime, under which he would be jailed for life without parole unless it was considered "manifestly unjust". 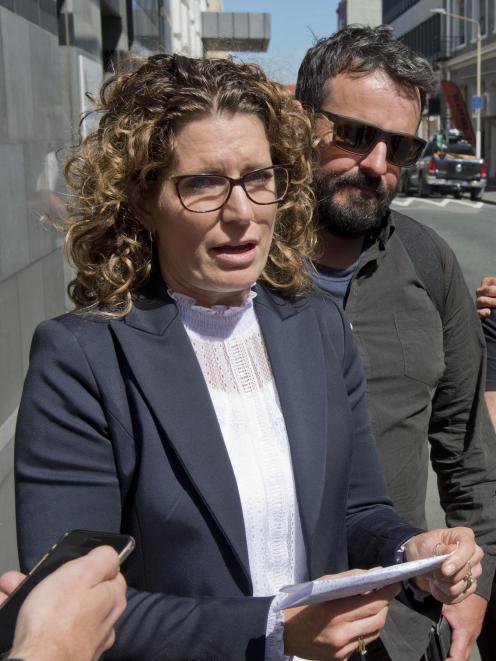 Brent Bacon’s sister, Lia Bezett (beside her husband, Sam), said the guilty verdict was a relief but did not detract from their grief. PHOTO: GERARD O’BRIEN
Collins’ first strike came in 2015 for indecent assault, the Otago Daily Times understands.

Collins and his wife moved to a state-housing unit in Lock St, St Clair in November 2018 and soon reconnected with the victim having spent time with him while they lived in Christchurch.

The brutal killing, which took place in a cramped unit in St Clair on February 4, 2019, had left Mr Bacon’s family devastated and scrambling for answers.

He was missing for two weeks before his brother-in-law, Sam Bezett, kicked down the door to the flat and was confronted with the bloody scene.

That same day, the victim’s body was found on a rural back road 35km north of Dunedin, in a decomposed state, after Collins and his 32-year-old wife, Aleisha Dawson, dumped it there immediately after the murder.

At trial, the defendant claimed his actions were undertaken in self-defence, but the jury was clearly not swayed.

After Justice Anne-Marie Doogue’s summing up yesterday morning, they took only an hour to eat lunch and return a unanimous guilty verdict.

The Bezetts had been introduced to Collins and Dawson by Mr Bacon and tried to give the couple assistance by offering them work at their property, believing they were trying to turn their lives around.

How their generosity was repaid was "pretty cutting", Ms Bezett said.

"We gave them opportunities to turn a page they clearly weren’t in a position to be turning.

"It certainly, I guess, dampened my faith in humanity and my willingness to help those in need."

Ms Bezett said the loss of Mr Bacon, who had been living with her at the time and working for the family business, had left a huge hole in their life.

"The actions of the defendant were callous, barbaric and cruel and have ripped our lives apart," she said.

"We, as a family, which includes Brent’s three precious children, will never get over this. Our wounds will weep forever.

"This verdict, while bringing family and friends some relief, will not reduce the pain and suffering we’ve had to endure over the past two years and beyond."

The court heard during the trial that Mr Bacon had his struggles with drug use and mental health but Ms Bezett said, in essence, he was "a funny, intelligent, loyal soul".

"He saw the best in everyone and had an intense desire to connect with others. He sought and craved people, love and meaning in his life.

"Brent was our glue, he made our family stronger. His presence will be sorely missed forever."

She was also keen to thank those in the wider community who had shown support for the grieving family.

"We’ve felt every ounce of your compassion and outpouring of love. This has truly softened what has otherwise been a tragic blow," she said.

Collins will be sentenced in May.