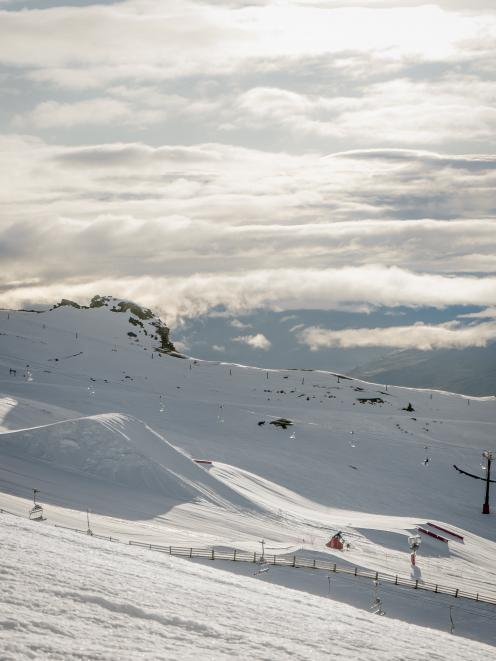 Warmer temperatures at Cardrona Alpine Resort have loosened the snowpack but conditions are still better than at the corresponding time last year. PHOTO: NED BRANNIGAN
Unseasonably warm temperatures have created almost spring-like conditions at the skifields but it is not unusual, scientists say.

Otago University researcher Todd Redpath has spent the past few years studying snow cover across the southern alps and one of his key findings was the high amount of variability in New Zealand’s snow cover each year.

"At the moment in the Craigieburn mountains, in northwest Canterbury, conditions are much leaner than they are in the southern lakes.

"They have not had the easterly snow events they rely on to build their snow pack up, whereas down in Otago we have been getting more snowfalls and better than last winter where it was quite warm in mid to late July," Dr Redpath said.

However, in the past week warm air has been "pumped down" from the north of New Zealand and the Tasman Sea which has kept temperatures high, he said.

"It is not cooling down at night. Any precipitation that comes through is coming on the back of warm air so the snow pack is just sitting there warming up and not getting that opportunity to cool down to freezing levels."

NZ Ski communications and media relations manager Libby Baron said the warmer temperatures had made the snow soft and springlike from midmorning onwards but it had been firm first thing in the morning.

Coronet Peak still had good coverage on-trail but off-piste terrain was variable at the moment.

The Remarkables also had spring-like conditions but good coverage across the mountain, Ms Baron said.

Cardrona Alpine Resort and Treble Cone communications executive Jen Houltham said Cardrona was also experiencing spring snow conditions with the snow firm in the morning and softening throughout the day.

Cardrona still had fairly good coverage but Treble Cone would be closed until later this week due to a highly saturated snowpack.

"We’re waiting for a significant cooling in the weather and or some snow before opening back up, but it is looking positive for later this week," Ms Houltham said.