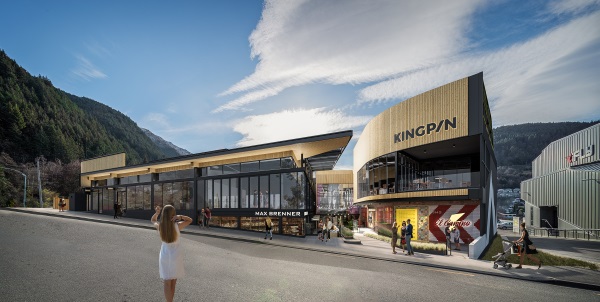 Brecon St's Upper Village complex will start opening over the next two months. Image via Mountain Scene
An Aussie developer’s huge faith in Queenstown has been displayed by a large dining and lifestyle hub that’s about to open below the Skyline gondola.

It comprises two buildings — with about 5000sqm of lettable area — separated by a central, external mall providing access to the tenancies.

Most premises are opening over the next two months, though Kingpin — which, alone, is employing 60 to 70 staff — opens late January or early February.

Grootemaat says just one 400sqm space has yet to be let — "I’m confident we’ll get that done in the next three months or so".

Brisbane-based Engage Group entered the Queenstown market through its M-Space brand, under which it developed a small commercial/industrial building by Frankton’s Pak’nSave and a nearby industrial subdivision.

Grootemaat says when they came here, often with a big group, "the feedback was there were no large spaces for the bigger tenants to come into, so that’s the opportunity we saw in building this precinct".

The complex was designed by Brisbane-based architects BSPN.

"We wanted to create a special building to put into a special town, and we think it has a good mix of the older elements of the town but also some of the bit more modern, to complement the backdrop."

"The result’s pretty rewarding seeing the finished product — that whole thoroughfare from town up to Skyline’s going to be pretty amazing."

The principal challenge, he notes, was caused by the building taking up the whole site,  meaning there wasn’t a laydown area, however that was mitigated by "good planning and management".

"It’s one of our highlight buildings we’ve done."

Grootemaat concedes Covid brought about "some dark days, but we’re now pretty clear Queenstown’s going to be a very good place to invest in, and we’re pretty bullish on the future".

"When those borders open, we think it’s actually going to be pretty hectic."

As for the name, Upper Village, he admits they borrowed it from Canadian resort, Whistler.

"We think this whole area could become known as Upper Village as more development occurs around that part of town."