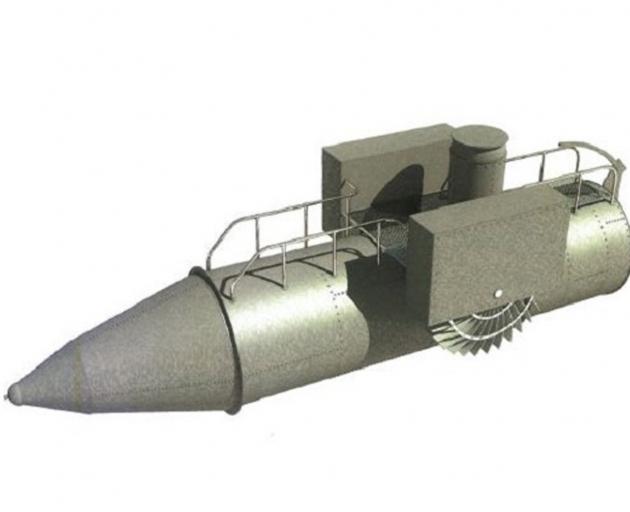 An artist’s impression reveals what the Platypus would have looked like. PHOTO: SUPPLIED
Excavation at the new Dunedin Hospital site could reveal a surprise — in the form of a submarine.

The missing three-metre section of one of the earliest examples of a submarine is reportedly buried under the old soap factory, where demolition gets under way this month.

Named Platypus, the submarine was built in 1873 by Thomas and Sparrow, of Dunedin.

The vessel had been intended for use in the mining industry at the time.

After several unsuccessful tests in Otago Harbour, it was bought by a man near Middlemarch — but its middle section disappeared before it got there.

Underground Overground Archaeology director Hayden Cawte said he had a hunch the submarine may be found in the excavation.

His company was contracted to advise on the heritage and archaeological components of the new Dunedin Hospital project.

"Whether it’s still there, we’re not sure, but it is possible," Dr Cawte said.

Strath Taieri Historical Society submarine committee chairman Pete Sparrow said he thought the chances of finding the submarine were slim, but he hoped it would one day be whole again.

"We’re 145 years on from when it was kept at McLeod’s soap works, which is on the hospital site, and we had many reports of it being moved around.

"But you never know with these things. Everyone thinks they’ve got a piece."

The other components of Platypus are on display outside the Middlemarch Museum, which has received funding to develop a covered space for the submarine.